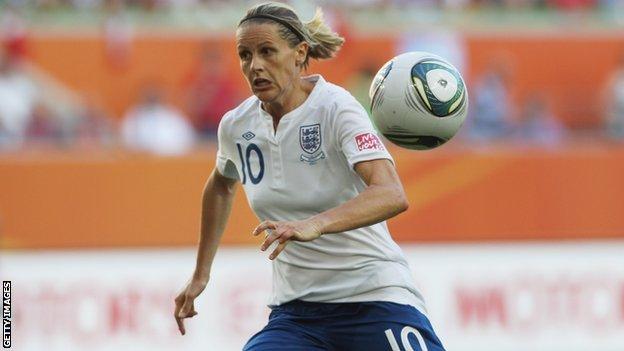 Kelly Smith struck twice from the penalty spot as England opened their Cyprus Cup campaign with an impressive 3-1 win against Finland in Nicosia.

But Hope Powell's team had to come from behind to clinch victory, midfielder Annika Kukkonen shooting the Finns in front after just seven minutes.

England gradually took control, however, and equalised through a 35th minute spot-kick by striker Smith after defender Steph Houghton had been brought down.

Carney put England ahead five minutes into the second half, the winger chasing a long throughball to toe-poke the ball home.

And, after several chances had gone begging, the scoring was completed by Smith two minutes from time - the second penalty awarded for a foul on striker Rachel Williams.

Powell was pleased with the display of a side that included debutant Jade Moore, the Birmingham midfielder, in their first competitive outing of the year.

"We played well in the second half especially and in the end we should have won by more goals," the national coach said.

"Credit to Finland, they started well and made it difficult for us. But we sorted a few things out at half-time and we were better in the second half.

"It was a good collective effort and it was pleasing to see Jade make a good debut - she broke things up well in midfield and showed good vision."

England's opponents in their next Group A match, Switzerland, lost their opening fixture 3-0 to France.

Powell added: "It will be an interesting game against Switzerland after we beat them in the qualifying play-off for the World Cup.

"They're a decent side and it will be tough, but I'm focusing on our players and looking to use all of them during the course of the tournament."

In Group B, Scotland lost 5-1 against Canada in their opening game, while Northern Ireland were 2-0 losers to New Zealand in Group C.