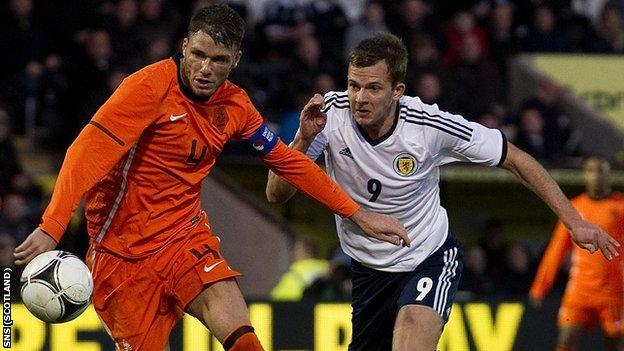 Scotland's Under-21 side remained a point behind leaders the Netherlands after the pair drew in Euro 2013 qualifying Group 10.

The Dutch had the better of the first half with Lerin Duarte, Marco van Ginkel and Nacer Barazite threatening.

Danny Wilson headed over from Gary Mackay-Steven's corner as Scotland pressed in the second half.

And Johnny Russell's low shot was saved by visiting goalkeeper Jeroen Zoet 14 minutes from the end.

Billy Stark's young Scottish side boast a better head-to-head record over Cor Pot's outfit, having won the first meeting in Nijmegen. Both sides have three rounds of fixtures remaining.

Scotland keeper Mark Ridgers tipped van Ginkel's swerving shot wide before, at the other end, Zoet saved a the feet of Tom Cairney following Russell's darting run to the byeline.

As half-time approached, Leandro Bacuna's shot was blocked after another promising advance from the visitors.

The hosts were more of an attacking threat in the second half and Wilson's header from Mackay-Steven's delivery dropped just over the crossbar.

Barazite burst into the box and forced Ridger to save before getting the break of the ball as the angled narrowed but Wilson got back to make the block.

Scott Allan came on for Cairney and set up Russell for a shot but the Dundee United striker's low drive was blocked by Zoet.

Scotland pinned the Dutch back in the closing stages but no goal was forthcoming.