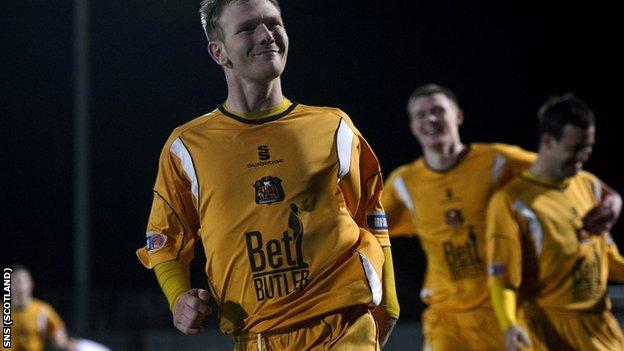 Dumbarton stretched their lead over fourth-top Stenhousemuir to 10 points to consolidate their place in the promotion play-off spots in Division Two.

The visitors, for whom it was a third straight defeat, never recovered from Bryan Prunty's early sucker-punch as the upwardly-mobile Sons secured an eighth win in nine outings.

Dumbarton took the lead in spectacular fashion after only 52 seconds.

Racing on to a punt forward from Scott Agnew, Alan Lithgow scooped the ball across the face of goal for Prunty to lash home an acrobatic overhead kick.

Kevin McKinlay had a drive blocked by Lithgow before Andy Rodgers headed over the crossbar as the visitors strived for an equaliser.

In the 32nd minute, however, Mark Gilhaney was on hand to double the hosts' lead, neatly converting James Creaney's cross from the right.

During cagey second half, Stenhousemuir might have reduced the deficit, but Gary Smith headed Stevie Murray's corner tamely over the bar.

The match was settled in the 75th minute, though, as Agnew fired an unstoppable rocket into the top corner from 30 yards.