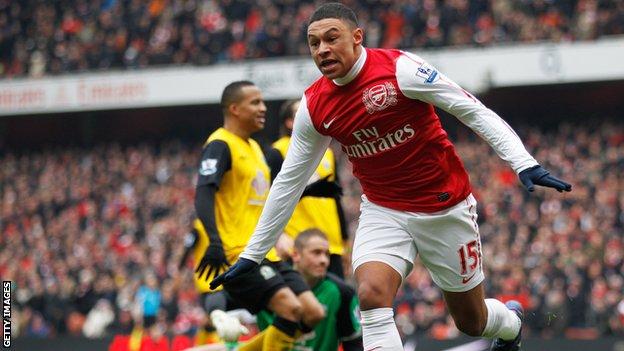 The 18-year-old winger has scored four goals in 16 appearances since his summer move from Southampton.

He has won seven England Under-21 caps but is awaiting his first senior call-up and was not chosen for Wednesday's friendly against the Netherlands.

"If he continues to play like this I am convinced he will go," said Wenger.

The Gunners boss initially eased Oxlade Chamberlain into the first-team set-up at Emirates Stadium and he featured sporadically until his starring role in the 2-1 home defeat by Manchester United on 22 January.

Since that game, he has featured in each of Arsenal's seven subsequent matches and scored twice in the 7-1 Premier League victory against Blackburn Rovers.

If Oxlade-Chamberlain makes the squad for the summer's tournament in Poland and Ukraine, he will follow in the footsteps of Arsenal team-mate Theo Walcott, who went to the World Cup in 2006 as a teenager.

"He is a little bit like a boxer in his upper body," added Wenger.

"He has not played too many games up until now because he was on a learning curve but he has a super quality and is not fazed by the biggest occasions.

"To put him in the team against any opposition... it is just natural for him to be there. For a young player, sometimes they waste a lot of time getting used to the pressure. He looks like he can take it.

"There are very few players like that, players who look like they have always played in the team."

Despite being overlooked for the senior team, Oxlade-Chamberlain is expected to pick up his eighth Under-21 cap in Wednesday's fixture against Belgium at Middlesbrough's Riverside Stadium.