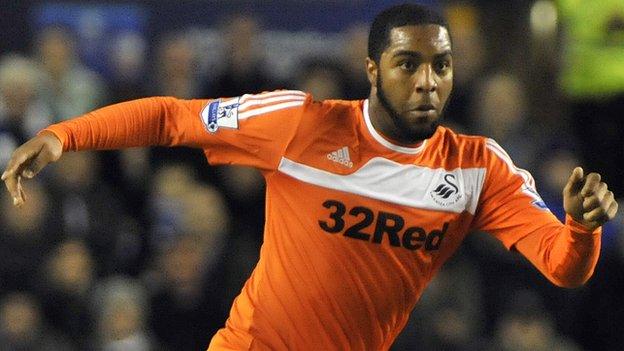 Swansea City fear Kemy Agustien may miss the rest of their Premier League season after having ankle surgery.

The Dutch midfielder had an operation on his ankle earlier this week and it was thought Agustien was set to be sidelined for three to five weeks.

But Swans boss Brendan Rodgers has confirmed the 25-year-old will be out for longer, meaning he could miss the majority of Swansea's run-in.

"He has had the operation," said Rodgers.

"And once the surgeon looked in there he had a few more issues than we first anticipated so it looks like he will be out longer than what we hoped.

"He has has been an important member of the squad, Kemy has been fantastic when he has been asked to play and had consistency in his training and he gives us that physical presence.

Agustien, who has made 15 appearances this season, sustained during a training session before the home defeat to Norwich City in February.

He has also been troubled recently by hamstring and knee injuries and the hamstring problem picked up at Arsenal in September kept him out of action for almost two months.

Since then he has struggled to earn a regular place in the Swansea team, with the arrival of Gylfi Sigurdsson and Josh McEachran in January further limiting his opportunities.