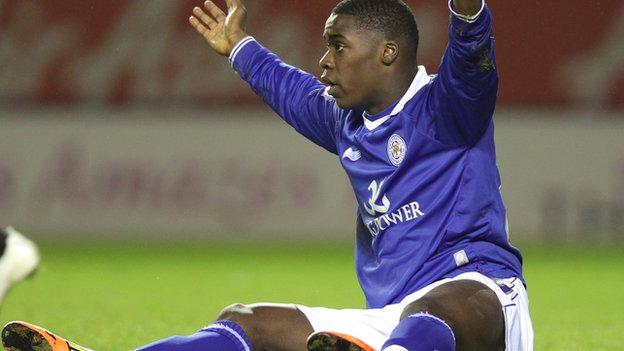 Leicester's teenage striker Jeff Schlupp has signed a new contract to keep him at the club until June 2015.

The 19-year-old Ghana international forward has made 17 appearances for the Foxes, scoring five goals.

Manager Nigel Pearson told the club website: "Jeff is a promising young player with a lot of potential."

The Foxes have also signed Sheffield United's young midfielder Corey Gregory, 19, on a youth loan until the end of April.

Gregory has had loan spells at Hucknall Town and Belper Town this season.

Schlupp, who scored six goals in a loan spell with Brentford last season, netted a hat-trick on his Foxes first-team debut against Rotherham in the Carling Cup.

His first goal in the Championship came in Leicester's 4-0 thrashing of local-rivals Derby County last October.

The youngster, who was born in Hamburg to parents of Ghanaian descent, made his senior international debut back in November.

"At just 19, he remains a player with a lot to learn in the game," added Pearson. "But he has already shown a lot of quality and scope to improve.

"We are looking forward to working with him over the next three years and I am sure he will continue to progress as a Leicester City player."