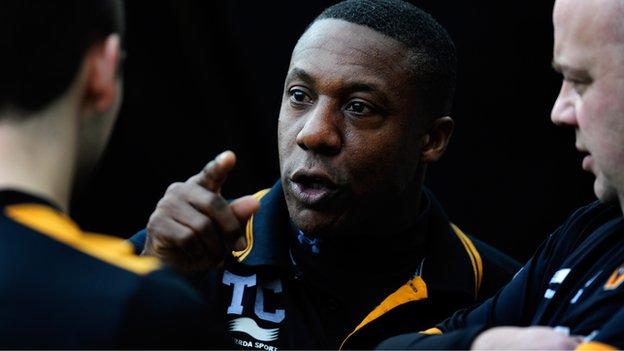 Wolves manager Terry Connor has defended his decision to drop defender Roger Johnson for their 2-2 draw at Newcastle on Saturday.

Connor omitted the Wolves captain for his first game in charge as one of three changes from the side that was beaten 5-1 by West Brom.

"I didn't want to do it, but thought it was the right decision," said Connor.

"I'm not blaming Roger for us losing to West Brom, but you couldn't keep the same team when you've lost 5-1."

He has to be a good pro. Being captain doesn't mean you have to play in ever game

Connor added: "Roger took it very well. He took it on the chin. He supported the lads and did everything I'd expect of him as captain of the team. That's what you have to do.

"He will want to be in the next team at Fulham, so he has to be a good pro. But being captain doesn't mean that you have to play in every game."

Connor was appointed Wolves boss until the end of last season last week following the sacking of Mick McCarthy, whose last game in charge was the thrashing at the hands of local rivals West Brom.

And after deciding to leave out Johnson in his first game at the helm, Connor will have more tough choices to make for the trip to Fulham this weekend.

Leading scorer Steven Fletcher is back in contention for a starting place after recovering from illness.

Striker Kevin Doyle scored against Newcastle in Fletcher's absence - meaning Connor could face a dilemma when picking his team to play at Craven Cottage.

"I'll cross that one when we come to it. If it's difficult decision, then I'll make it," said Connor.