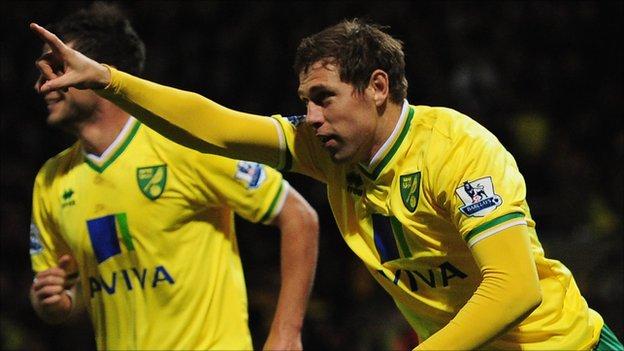 Holt, 30, scored 36 goals in 73 league games during two spells at Holker Street, and is now playing in the Premier League with Norwich City.

Bayliss told BBC Radio Cumbria: "He can go all the way, you only have to look at Grant Holt, he's the marker.

"Grant's not blessed with pace but he is very robust and puts chances away."

He added: "He gets chances and creates chances, and like Grant the destiny is in Cook's feet, he can go as far as he wants to go."

Cook began his career at Carlisle United where he made an impression with the under-18s in netting 22 goals in his first season as a scholar at Brunton Park, and 37 in the second.

However the 21-year-old never made an appearance at first-team level, and following a permanent switch to Barrow in January 2011 has scored 17 goals in 50 league games.

"It was a big year for him this year, he's been unfairly criticised at times because he looks a bit ungainly," he said.

"The kid is clinical, he's got a great attitude and he's working twice as hard, but he's still a baby.

"He might be 6ft 3in but he's still very young and immature, and when that penny drops, he fills out physically and matures in the head we'll have a player on our hands."

Meanwhile Bayliss has been named the Blue Square Bet Premier manager of the month for February, following a run of seven points from a possible nine.