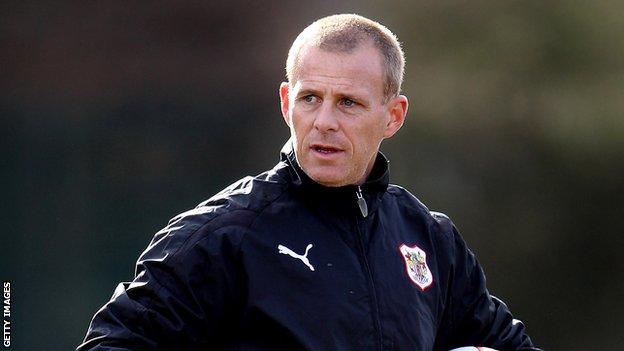 Stevenage boss Gary Smith believes his side's comeback against Huddersfield will give Boro a mental edge if they meet up in the League One play-offs.

The Terriers squandered a 2-0 lead to draw 2-2 at Broadhall Way on Tuesday.

TOP OF LEAGUE ONE

"We'd all like to be there and I think that's going to put a very serious seed of doubt in their mind."

Strikes in the last 20 minutes from Michael Bostwick and Robin Shroot earned a point that keeps Stevenage sixth, while Huddersfield are three points adrift of the automatic promotion spots.

Smith was buoyed by the performance after back-to-back defeats at Notts County and Chalrton.

"They've yet again shown again against a top three team that they're a good match and capable of beating those sides - and regularly," he said.

"I think that bodes well not just with the point on the board but for the future."

Meanwhile, the former Colorado Rapids manager will assess the fitness of goalkeeper Chris Day, who had to be replaced following a fall.

"He's jarred his shoulder on the ground," said Smith. "I'm not quite sure of the extent of the injury.

"Normally 24 to 48 hours will give us a much better idea of what we're looking at.

"But I would hope it's nothing too sinister and he won't be far from coming back into the team for the weekend."