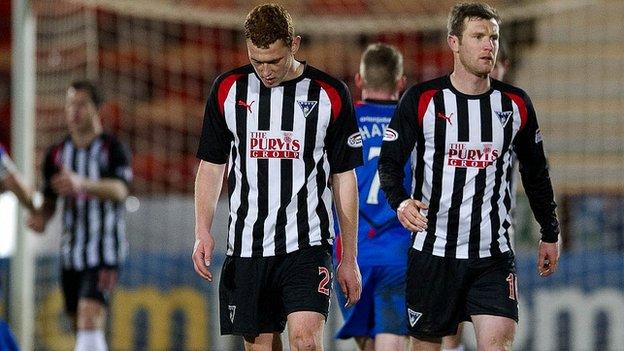 Dunfermline players and staff have not been paid their full February wages.

The Fife club are suffering from a cash flow problem and some players have received only 60% of their salaries.

Dunfermline are still waiting for £85,000 from Rangers for tickets sold by the Ibrox club to their fans for a match at East End Park on 11 February.

And club chairman John Yorkston told BBC Scotland: "The Rangers situation has had a knock-on effect. I can confirm full wages were not paid."

Rangers entered administration on 14 February under chairman Craig Whyte over a £9m unpaid tax bill for VAT and PAYE.

On the day the Scottish Premier League's bottom club announced a loss of £431,621 for the year ended 31 May, 2011, Yorkston added: "We have made other arrangements to get monies in and it should be all squared up on Monday."

And Yorkston revealed he had written to SPL secretary Iain Blair to clarify the club's position.

Earlier this season the Pars closed the North Stand at East End Park to supporters to lower running costs.

Closing the stand was to reduce police and stewarding costs, the club say, and the money saved was to be used to fund fuel costs associated with undersoil heating.

Dunfermline are at home to Motherwell on Saturday which will bring in much-needed revenue.

The club's trading figures were an improvement on the previous 12 months, when close to £1m was lost.

The latest figure included player and management bonuses of nearly £185,000 as a result of winning promotion.

"Our immediate focus is to retain our position in the SPL and generate profitability from our trading results," said Yorkston in an earlier statement.

Chief executive Bill Hodgins added: "It was through enormous hard work by all staff, and especially those in hospitality, sales and marketing, that enabled us to improve our financial situation and a great deal of praise also has to go to the football management staff who secured promotion to the SPL with the same financial resources as the previous year.

"Obviously more work is required as we aim to achieve a small surplus this season and then to build upon that for future years.

"This will still be challenging, given economic conditions, the impact of the postponement of our Kilmarnock game followed by the recent insolvency of Rangers FC which could also impact on other member clubs."