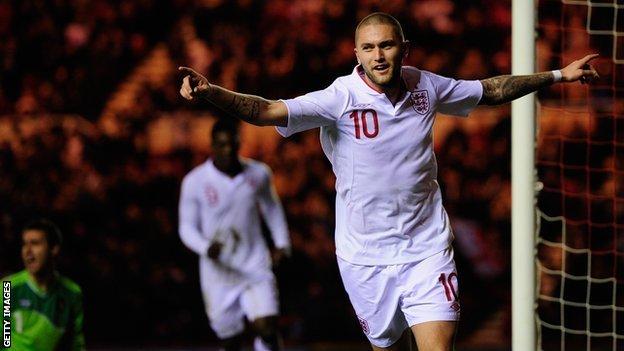 The home side went ahead when the Arsenal man curled in a magnificent long-range strike, before defender Steven Caulker doubled the lead.

It leaves England top of their qualification group with two games left to play against Azerbaijan and Norway.

If the build-up to the game was all about Oxlade-Chamberlain, it was Gunners team-mate Lansbury who stole the limelight with a commanding performance that would have impressed manager Arsene Wenger.

England were bright and confident on the ball, spraying passes around the pitch with real purpose.

They fully deserved their early lead which came when Lansbury, on-loan at West Ham for the season, picked up the ball on the left flank before unleashing a speculative effort which curled over Belgium goalkeeper Koen Casteels and into the net.

Casteels made up for his error in judgement for the goal by keeping out another bending strike from the scorer.

While England were calm and composed in possession, the Belgians' rare forays forward ended in disappointment - shooting wildly off-target when presented with openings.

Coach Brian Eastick, standing in while Stuart Pearce took charge of the senior side, would have been delighted to see his team double their advantage when centre-back Caulker nodded in from close range after Craig Dawson's knock-back.

But they survived a scare when Belgium striker Christian Benteke found space in the box but was unable to trouble goalkeeper Jack Butland with his towering header.

Wilfried Zaha, making his debut for the U21 side after an excellent season with Crystal Palace, was impressive in his first game, looking sprightly and causing the Belgians plenty of problems.

It was his neat pirouette and cut-back which led to the third goal as Lansbury reacted quickest to sweep home his second of the match.

With England cruising, Belgium looked for opportunities to restore some pride and chances fell to Gianni Bruno, who screwed his shot wide, and Nill De Pauw, whose shot was blocked by the assured Butland.

Oxlade-Chamberlain converted a late penalty, after being brought down in the box by on-loan Bolton man Dedryck Boyata, to cap an authoritative performance by the youngsters.