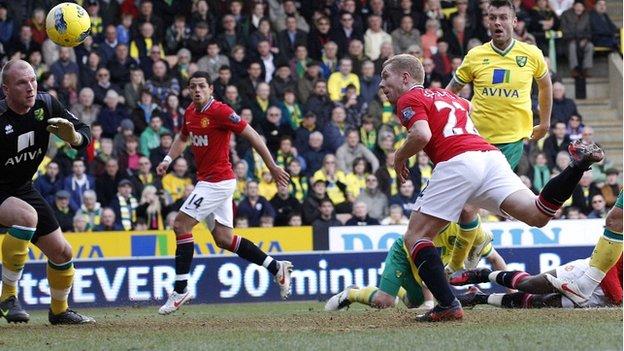 Former Manchester United defender Gary Pallister believes Harry Redknapp is the only manager who could tempt Paul Scholes to play for England again.

Scholes, 37, quit playing for his country in 2004 but, having retired at the end of last season, returned for Manchester United in January.

SCHOLES IN PREMIER LEAGUE THIS SEASON

"He could be the only man, apart from Sir Alex Ferguson, that could do that but my feeling is it won't happen."

Tottenham boss Redknapp has been tipped by several England players to be the next manager after Fabio Capello resigned over the handling of John Terry being stripped of the captaincy in February.

And, although he has distanced himself from the job, the Spurs manager said Scholes should go to the 2012 European Championship in Poland and Ukraine this summer.

Scholes, who won 66 caps playing for England and scored 14 goals, retired from international football following Euro 2004 after being frustrated at being played out of position - and because he wanted to spend more time with his family.

And Pallister, who was also capped 22 times, said: "Harry knows how good a player he is. Unfortunately, when he was playing for England, he got messed about.

"Ultimately that led to him walking away from that scenario because he was getting so frustrated, so I think he's made his mind up once about it and it would be very much a surprise if he was to turn around now.

"Scholes is probably right in just concentrating on Manchester United and hopefully getting another season out of himself next year."

Manchester United boss Ferguson said it would be a "big step" for Scholes to return for England.

But the midfielder surprised the football world when he came out of retirement to play for his club against Manchester City in their FA Cup third-round tie on 8 January.

And he almost completed a shock return for England to play in the 2010 World Cup.

He was contacted by Capello's assistant Franco Baldini at short notice, but said he was not given enough time to make a decision and did not want to replace players who had secured England's qualification to South Africa. He has since said that was a cause of regret.

"Scholes has a rare quality in English football which allows him to control the pace of the game."

Read more of the blog here

"The one thing he does give you is control of the ball and doesn't give it away too often. I'm sure he would be a plus but I don't think that's going to happen.

"If Harry Redknapp went to him and said, 'Listen Scholesy I want you to be a pivotal part of this European Championship', then it might sway him.

"But Capello sent his second in command to speak to him last time and I think he felt that, if you were desperate for him to go to a major championship, then the manager would have come and asked Scholes himself."