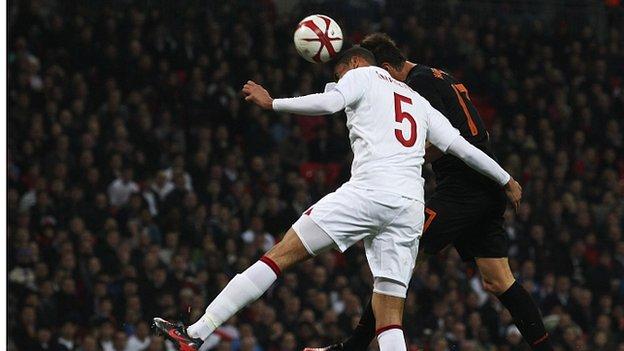 England defender Chris Smalling was hospitalised with a deep cut after a clash of heads in the 3-2 friendly defeat by the Netherlands.

The Manchester United star collided with Klaas Jan Huntelaar as the Dutchman headed his side's second goal from a Dirk Kuyt cross at Wembley.

The game was delayed for several minutes as both players stayed down before being substituted.

Liverpool's Steven Gerrard came off as a precaution with a tight hamstring.

"Chris Smalling has a really bad gash on his head and went to hospital," said England caretaker manager Stuart Pearce.

"Gerrard was just feeling a little bit tight so we took him off as a 'precautionary', on the grounds we were only going to play him for 45 minutes anyway."

Chelsea's Daniel Sturridge, who replaced Gerrard on 33 minutes, also suffered a swollen toe which forced him off minutes before the end.

While Smalling was stretchered off, Schalke 04 striker Huntelaar walked off holding a bandage to his face but was also taken to hospital.

"Huntelaar has gone to hospital because we think he has some damage there, but we don't know for sure," said Netherlands coach Bert van Marwijk.

"He looked better in the dressing room than on the pitch, but we have decided to have him checked out."

Arjen Robben scored in stoppage time to give the Netherlands the win after Gary Cahill and Ashley Young scored in the last five minutes to draw England level.

Robben put the 2010 World Cup finalists in front in the 57th minute before Huntelaar added the second shortly after.