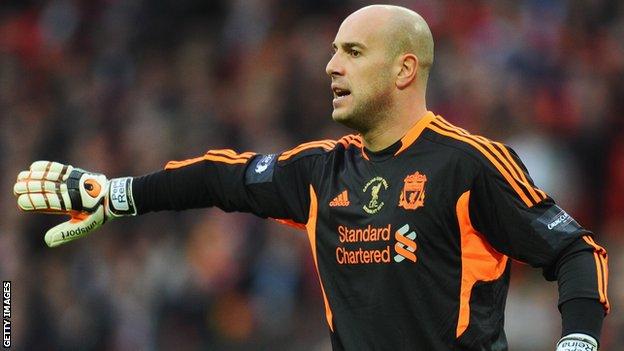 Liverpool's Jose Reina has been caught up in a race row after complaints that a television commercial he appears in is racist and homophobic.

They claim it "depicts black people in a jungle scenario as stupid, backward, animalistic homosexuals."

OBV say the advert has been pulled from Spanish TV since their complaint.

The advert played on Reina's surname, which means "queen" and shows the Spain international being introduced to a tribal chief who chooses him as his partner.

Campaigners claim that Groupama said it does not "contain either offensive or any discriminatory content".

"Firstly, how would the Spanish feel if the English stereotyped Spanish people as backward, stupid, and animalistic homosexuals?

"Secondly, what does this say about Pepe Reina?

"The Liverpool goalkeeper has lived and worked in the UK for nearly a decade, does he think it's okay characterise black people this way?

"Does he think his black team-mates will laugh at his joke?"

Reina, 29, joined Liverpool from Villarreal in 2005 and helped them to win the Carling Cup against Cardiff on Sunday.

Liverpool have already been involved in one race storm this season after striker Luis Suarez was banned for eight matches for abusing Manchester United defender Patrice Evra.