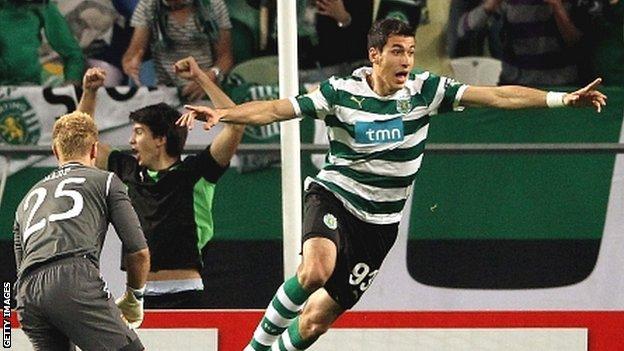 Manchester City must overturn a one-goal deficit to reach the Europa League quarter-finals after suffering a last-16 first-leg defeat to Sporting Lisbon.

It was a frustrating night for City, who were out of sorts against a well-organised and incisive Sporting side.

Xandao scored the only goal in the second half when he back-heeled in from close range following a free-kick.

City remain favourites to advance but they will have to be better in the return leg in Manchester on 15 March.

It could have been worse for Roberto Mancini's men, but, as he has done on a number of occasions this season, goalkeeper Joe Hart came to their rescue with a couple of superb saves, most notably from Ricky van Wolfswinkel's close-range shot during a period of pressure from the buoyant hosts after the opening goal.

While City have shown enough this season to suggest they are more than capable of triumphing at the Etihad Stadium, they must be more incisive in attack if they are to do so.

Only in the final 20 minutes, following Mario Balotelli's introduction for the ineffectual Edin Dzeko, did they pack any real punch up front.

The Italian's audacious "Rabona" cross set up David Silva at the near post to fire just wide, before Balotelli hit the crossbar with a header that would have been ruled out for offside against Joleon Lescott.

Lescott had come on early in the game for captain Vincent Kompany, who, worryingly for Premier League title-chasing City, pulled up clutching his calf.

The night would only get more frustrating for Mancini's side.

Sporting were at pains to emphasize City's overwhelming superiority ahead of this tie, to the extent that midfielder Marat Izmailov claimed they were the "third best team in the world behind Barcelona and Real Madrid".

However, for all their obvious talent, City remain relative novices on the European stage and at times their inexperience was clear to see as they struggled to break down a resolute Sporting side, while also failing to stem their counter-attacks.

"Sporting were well organised and set themselves up well tonight. City weren't at their best and will have to improve to go through. But I expect them to finish the job at the Etihad Stadium."

The likes of Barca and Real have educated themselves through years of European exposure on how to combat such tactics, but City do not have the luxury of such lengthy learning.

Silva, their chief creative force, was crowded out as soon as he showed attacking intent, while strikers Sergio Aguero and Dzeko were given equally short shrift in the box. Gareth Barry's curling shot from the edge of the area and a close-range header from Kolo Toure - saved by Sporting keeper Rui Patricio - was the closest City came to a goal in the first half.

Sporting were efficient at one end and opportunistic at the other. Six minutes into the second half, Hart was forced to palm away Matias Fernandez's free-kick and, while the keeper did well to save Xandao's follow-up, he was taken by surprise as the defender expertly back-heeled the ball into the net.

City strived for parity but, despite Balotelli's best efforts and an Aleksandar Kolarov shot that flew past the far post, they failed to sufficiently trouble Sporting keeper Patricio.