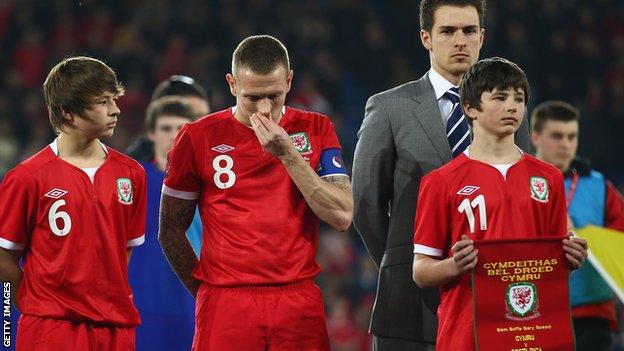 The result was never going to be important against Costa Rica.

Rather, it was a night to remember a great man, Gary Speed. He was a fantastic player, captain, and manager for Wales.

He transformed the squad into a group of players full of confidence and belief that we have a fantastic chance of qualifying for our first major tournament since the World Cup of 1958.

There was a tremendous atmosphere in and around the stadium before and up to kick-off, but when Craig Bellamy and Aaron Ramsey walked out with Gary's two sons, Ed and Tommy, the Cardiff City Stadium erupted.

I've never heard a player's name chanted as it was when the teams lined up, with the incredible minutes applause lasting for what seemed like an eternity.

The host of former players that turned up - giants of the game like Ryan Giggs, Alan Shearer and Patrick Vieira - spoke volumes about the respect we all felt towards Gary as a person and a player.

Osian Roberts took charge of the team with the new manager, Chris Coleman, taking a back seat for this game.

Wales started with the same formation that the lads had used under Gary, 4-3-3. They were without goalkeeper Wayne Hennessey and two of the most influential players in Ramsey and Bale, so it wasn't a side at full strength.

The Welsh boys started quite brightly, passing the ball well with purpose but without creating too many opportunities in front of goal. Bellamy and Hal Robson-Kanu caused problems down both wings but too many times the final ball into the box was disappointing.

The only goal of the game came after seven minutes and went to the visitors, involving their two star performers in Brian Ruiz and Joel Campbell. It was a well-worked goal with some neat interchanging of passes by both players, eventually ending up with Campbell finding himself with plenty of time to pick his spot and confidently strike the ball past Lewis Price.

Wales had plenty of possession but found it hard to break down a well organised and disciplined Costa Rica back four, who were well assisted by their midfield.

Steve Morison, who did a fine job holding the ball up, came closest to scoring when he thundered a bullet header from a David Vaughan corner against the bar towards the end of the first half.

The second half followed the same pattern as the first with Wales dominating possession. But apart from Bellamy - who gave his all as he always does in a Welsh shirt - going close on a couple of occasions, as well as one terrific save by the Costa Rican goalkeeper from a well-struck left footed Robson-Kanu strike, we didn't really look like getting an equaliser.

Osian Roberts tried to change and freshen things up, bringing the likes of Sam Vokes, Rob Earnshaw, Jack Collison and Joe Ledley on to the field.

It was important as many players as possible were given a chance to play - some of them like Earnshaw and Danny Gabbidon had actually played alongside Speed.

Once again Darcy Blake performed well in a Welsh shirt and Andrew Crofts impressed in the middle of the park, awarded the man of the match.

I'm not too downhearted losing the game as Wales played with a good tempo for the most part and kept possession well. With Bale and Ramsey to come back I'm certain Wales will create more goalscoring opportunities in the forthcoming games.

And we have to look ahead now. Gary would not want us to stand still. We must build on his fine work.

It's been a difficult week for the players, but the best way they can honour Gary's memory is to secure a winning start to the World Cup qualifiers and take Wales to the finals in Brazil.