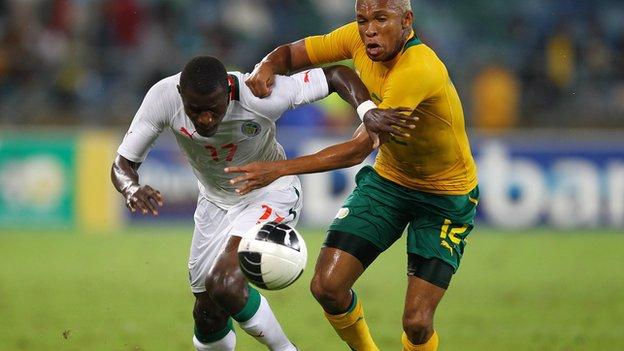 Ghana were held to a 1-1 draw by 10-man Chile in their friendly game in the United States on Wednesday night.

Richard Mpong put the Black Stars in front but the lead was cancelled out by a Matias Fernandez penalty.

South Africa and Senegal drew 0-0, Ivory Coast were held 0-0 by Guinea and Tunisia had a 1-1 draw with Peru.

But Egypt and Morocco both claimed victories, with the Pharaohs beating Niger 1-0 in Qatar and Morocco securing a 2-0 win over Burkina Faso.

The Ghana starting line-up featured only six of the team who began their Africa Cup of Nations semi-final with Zambia last month.

Both Ayew brothers - Dede and Jordan - had pulled out of the game with injury, and Asamoah Gyan is on a temporary break from international football.

The game might represent the final match in charge for Ghana coach Goran Stevanovic, whose future will be determined next week.

Mpong had come on as a substitute early in the match, replacing Dominic Oduro, and scored in the 42nd minute.

Chile went down to 10 men when Matias Campos was sent off, but five minutes after that the South Americans were awarded a penalty, which Fernandez converted.

Ivory Coast were also missing a large number of top stars for their friendly with Guinea.

Didier Drogba, Kolo and Yaya Toure and Salomon Kalou were amongst those absent.

But a team which still included Gervinho and Seydou Doumbia amongst others could not break through against Guinea - who once again proved that they were unlucky not to go further in Equatorial Guinea and Gabon.

Senegal's disappointment at the Nations Cup has promopted wholesale changes, with coach Amara Traore being sacked and a number of senior players being left out.

The game against South Africa finished 0-0 with neither team creating many chances - the lack of goals will be a particular concern to Bafana Bafana fans as they build-up to hosting the 2013 Africa Cup of Nations.

In other friendly matches, Morocco had a two nil win over Burkina Faso in Rabat.

Mbark Boussoufa got the opening goal on 19 minutes with the second coming from Yousseff El Arabi just after the hour mark.

Egypt earned a 1-0 win over Niger in a game which was played in Qatar with the goal coming from the penalty spot courtesy of Hosny Abd-Rabou.

And Tunisia were held to a 1-1 draw by Peru in Rades.

Both goals came at the end of the first half with Wissem Yahia putting the hosts in front, only for Claudio Pizzaro to cancel out the lead in stoppage time.