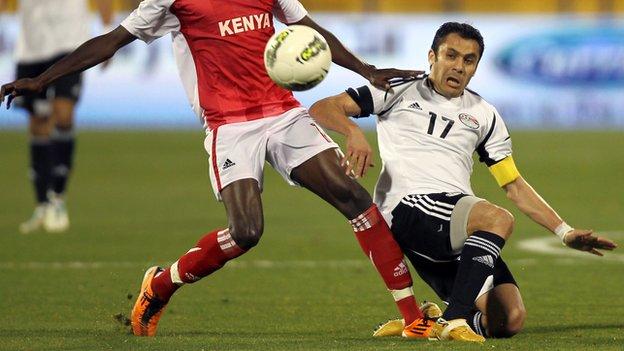 Egypt's Ahmed Hassan, the world's most capped international footballer, says he plans to continue his career.

Hassan has made 180 international appearances for the Pharaohs - two more than the previous record holder, Mohamed Al Deayea of Saudi Arabia.

"My career with Egypt is not over yet," Hassan said following his substitute appearance against Niger on Wednesday.

"Some people said I carried on playing to reach a personal achievement, but this is completely untrue."

That game marked his 180th cap - meaning he broke Al Deayea's record in a game earlier in the week against a Kenyan team.

There were doubts over whether that appearance would be recognised because it came against a weakened U23 Kenya side.

But football's world governing body Fifa has confirmed that his 179th and record-breaking cap came in the earlier game.

Hassan's career has spanned Egypt's most successful period but his achievement has come in the shadow of the tragedy in Port Said last month, which cost the lives of 74 fans.

"Of course I am happy with my achievement, but my happiness is not complete," Hassan said.

"I am still saddened by the deaths of the Al Ahly fans in Port Said."

The coach of Egypt, the American Bob Bradley - who has led the team for the first time this week after several months of preparation - praised Hassan's contribution to Egyptian football.

"Ahmed Hassan has been a winner in his career, a footballer who leads by example and plays with energy and commitment," Bradley said.

"The record is something every Egyptian must be proud of and has been earned after a great career - he has been such an important member of the national team for so many years."

Hassan made his debut for the Pharaohs in December 1995 in a 2-1 defeat at the hands of Ghana.