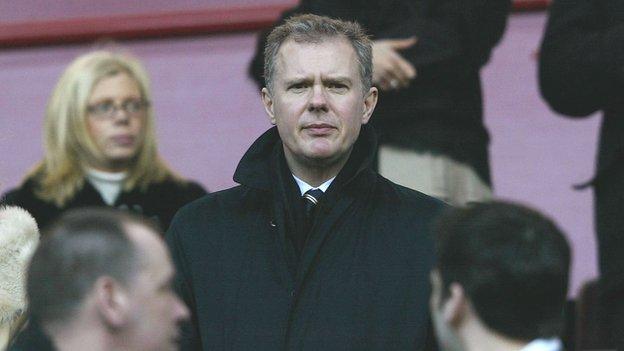 A Company Voluntary Arrangement, that has since failed, was agreed during Pompey's last spell in administration.

"I was hoping to get some money from the Premier League, but the next four payments are all assigned to Gaydamak."

But Birch vowed that he and accountancy firm PKF will do all they can to secure the money to ease the club's financial plight.

This club has over £100m of debt over two administrations

"We have instructed lawyers to challenge this, but the process may take time," he said in a statement on the club's official website.

"The club is also still owed nearly £300,000 by the CSI administrators and their lawyers, who are withholding the funds as payment for their work in applying to court for administration. PKF is talking to its lawyers to see if this money can be returned to the club."

Birch also reiterated concerns that the club may not have enough money to get them through until the end of the season.

"We're down to the wire now, I've got a meagre amount of money to try to get us to the end of the season," he said.

"It puts another hole in my cash flow, I'm very worried. I need to turn to other revenue-raising issues and projects but I'm not confident.

"We can look at loaning players out to get some of the costs away but things are pretty limited at this stage of the season."

He also revealed that money owed to creditors under any previous agreements will now be even more diminished than first promised.

"The CVA pays creditors a percentage in the pound. The CVA that was performed here at Portsmouth was giving them 20p in the pound, but obviously that has now failed and they will receive nothing from that.

"Out of this administration it will either be another CVA or a liquidation, and a dividend will be paid again.

In light of 30 members of staff being made redundant in February, Birch stated that HM Revenue and Customs are currently challenging a Premier League and Football League bill that ensures unpaid players are allotted money first.

"The so-called football creditor rule is under attack at the moment by HMRC and we're waiting for a verdict on that case. It might mean that if the rule is scrapped the players will become part of the general body of creditors and not get this preferential treatment."

Birch also admitted that he is at a loss as to how Portsmouth have got themselves into such a dire situation.

The BBC also understands that any advantage accrued by other teams in games against Pompey, including points and goal difference, would be wiped out by the Football League if the side do not fulfill their remaining fixtures.