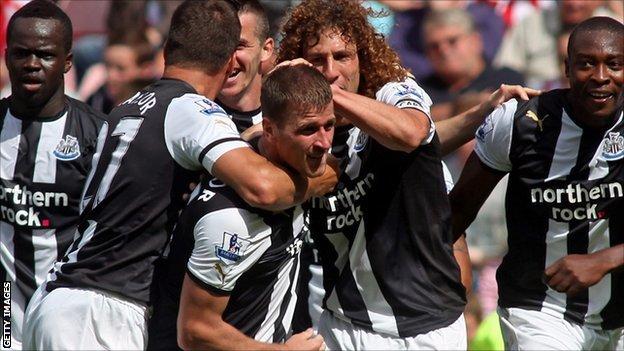 On enemy territory at the Stadium of Light in August, the 27-year-old curled a free-kick over the Sunderland wall to secure a priceless victory and add his name to Geordie folklore.

"I'd put it number one, I've had some great memories in football but that ranks right up there, I can't wait to go again," Taylor said.

The Merseysider will not have to wait long, as Sunday sees the two clubs meet again in the return fixture on Tyneside.

Newcastle have had the upper hand in derbies on home turf - the last Sunderland win came in November 2000 - while the last visit saw the Magpies inflict their heaviest defeat on the Black Cats since a 6-2 hammering in December 1955 with a 6-1 scoreline.

However the man at the helm for the Wearsiders on this occasion is Martin O'Neill, a veteran of Old Firm derbies with Celtic and Second City derbies with Aston Villa.

"We can say, a few of our boys over the past few years have played in more derbies than theirs," Taylor added.

"When we played them this season I think they had 10 new players, so they wouldn't have known too much about it.

"I'm sure Martin will have them ready, tell them what it means to fans but there's only one team I want to win on Sunday and I'm sure that the other lads feel that way too."

The intensity of this north east tussle has ensured a sell-out, with a little over 52,000 supporters descending on the stadium for a midday kick-off.

"I'm sure they'll get there extra early on Sunday, from Saturday night I'm sure there'll be a few who go out that might not even go to sleep," Taylor said.

"All we can ask is that they get behind the lads, hopefully we can produce and get the three points that everyone in that stadium other that the little section at the top wants, and hopefully it's a black and white day."

And what price a repeat of August's heroics from the Magpies utility man this weekend?

"I'd love to be the one who did it again on Sunday," Taylor added.

"Come Saturday night, when I'm lying there ready to go to sleep I'll be dreaming of doing it again."