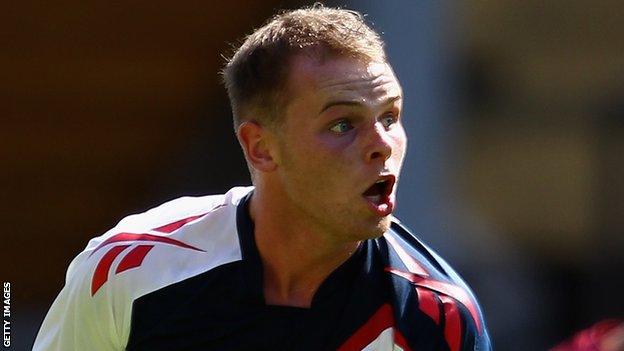 On-loan Macclesfield defender Mark Connolly says he is grateful for the chance to play first-team football after joining from Bolton Wanderers.

The 20-year-old is yet to play for the Trotters since joining from Wolves for £1m in 2009.

"Macclesfield were struggling with a few injuries and I wanted to play," he told BBC Radio Manchester.

"That was the main reason, to get out, play and to get a sniff of the first team here and see what it's like."

He added: "The gaffer [Owen Coyle] told me just to get out and play league games.

"It's not just that it was 20 minutes away but it's a good club so I was happy to come.

"Gary Simpson just told me to 'come here, enjoy yourself and work hard' and he's been brilliant since I've come in and so have the lads."

The Ireland Under-21 international joined the Wanderers for £1m from Wolves in 2009, and is captain of the reserve team.

Republic of Ireland Under-21 international Connolly, who has represented his country at youth level seven times, says one of the main reasons he choose to move to the Moss Rose was what he had seen of them in the FA Cup and League Cup this season.

"It was very easy [the decision to move]. Because we'd played Macclesfield a few times I knew what they were about," he added.

"The three games, even in the Carling Cup, was a different class. That's why I was happy to come here and I knew that every lad I was coming to work with would work hard for you.

"It's a lot different. You don't have as much time on the ball, you don't really have much time to take it down and play it.

"It's competitive, so when you're losing 1-0 in a reserve game it's not really as much that you'd push people on.

"I've come in the the last two games, we haven't had a point before, but now we're two points from two, which means we might get that bit of luck now which is all we need."