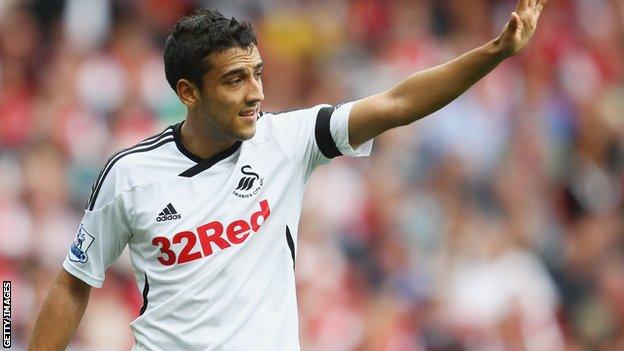 Swansea left-back Neil Taylor has targeted Saturday's clash with Wigan Athletic as a chance to return to winning ways.

The Swans' last win in the Premier League was a 2-1 victory away to West Brom in February.

Since then the Welsh side have lost to Norwich City and Stoke City, but Taylor is confident his team can get a result at the DW Stadium.

"Wigan's a game where we want to go there and get a result," said Taylor.

"You don't want to go three games without getting a result because you could start getting into problems."

"They were two soft goals from our point of view and we missed chances ourselves," he said.

"We could have had a penalty. So overall it was a disappointing day.

"But we won't get too disheartened. We came here and controlled the game, and probably had the better of the play.

"No teams are really battering us. We'll go to Wigan looking for a positive result."

Swansea will head to the DW Stadium on Saturday knowing that a win against bottom of the table side could halt their own downward slide towards the relegation zone.

The Swans currently lie in 14th position in the Premier League, with a healthy nine points separating them from the relegation zone.

Wigan, managed by former Swansea boss Roberto Martinez, have only won once at home in the league this season.

Their solitary home win was against QPR in August but Martinez's side have drawn their last two games at the DW Stadium against Everton and Aston Villa.