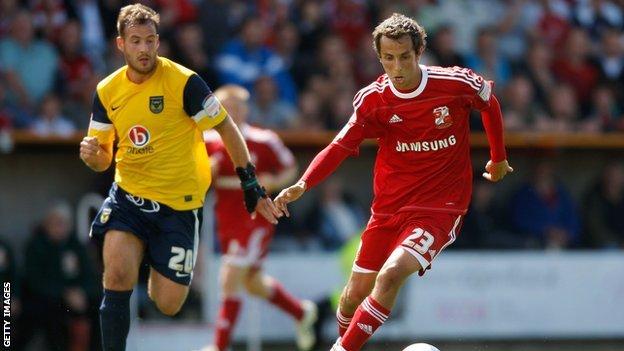 Some might say that the Tyne-Wear clash between Newcastle and Sunderland is the fiercest derby game of the weekend, but not those at either end of the A420.

For fans of Swindon and Oxford, Saturday's encounter is the biggest fixture on the football calendar.

It will be the first league meeting between the sides at Oxford's Kassam Stadium since it opened in 2001, with home fans snapping up tickets back in November, while Swindon sold their whole allocation in a matter of hours.

Lying 30 miles apart, they share a sporting rivalry that has thrived through the years, and is displayed at its most volatile when the two teams meet on the football field.

At first it was the rarity of the fixtures between the sides that stoked the flames; there were a series of friendlies spread across the 1950s, with the first competitive game taking place in 1965.

But then familiarity began to breed contempt. The two rivals met far more regularly during the 70s as they found themselves in the same division.

"It was a time when football was blighted by the behaviour of those who thought it was better to fight the opposition supporters than watch the game.

"I remember one County Ground encounter when I had to spend the entire match pretending to be happy when the team in yellow and blue scored. The Town End had been infiltrated by those who follow the other team.

"It was a horrific afternoon. The police were kept busy with a constant string of arrests, and there was genuine fear in the ground. I remember crash barriers being torn out, and even smoke coming up from impromptu bonfires."

Oxford picked up their first win at the County Ground in 1973, but only secured their second victory on enemy turf earlier this season, when they ran out 2-1 winners in the first meeting between the sides in almost nine years.

"Oxford fans had spent four years out of the league, much to the delight of the Swindon fans," says Nick Harris, U's commentator for BBC Radio Oxford.

"Even when Oxford got back in the league they had to wait another season before Swindon were relegated from League One.

"There has always been fierce rivalry between Oxford and Swindon as towns, especially in sports, but particularly football and speedway."

Indeed, there was a mass brawl between spectators at a speedway meeting during the height of a feud between Martin Dugard of the Oxford Cheetahs and Brian Karger of the Swindon Robins, who regularly fought each other.

But undoubtedly the most infamous event of the long-standing footballing rivalry took place in the early eighties.

"It's a rivalry that has got fiercer over the years and especially after the smoke bomb incident at the County Ground in 1982," Harris continued.

"On that day a smoke bomb was thrown on the pitch from where the Swindon fans were standing. In the confusion the referee did not stop the game and Swindon scored a vital goal (a late winner in a 3-2 win).

"There was chaos after that with the referee being struck by a coin, allegedly thrown by the Oxford fans. It certainly made the rivalry even fiercer between the fans."

The rivalry went on another barren run after that game; Oxford, after a spell in the old First Division, did not visit the County Ground for seven years as Swindon languished in Division Four.

"In Football League terms, it's not as old as the Merseyside or Manchester derbies, but to both sets of supporters it's just as fierce," Morgan continued.

"So much so that it's difficult for a Swindon fan to mention the other side except when these games come along.

"When the two sides meet, there's a feeling you don't get in any other Town game."

And with Oxford looking for a rare double over Swindon, who are currently riding high in the hunt for the League Two title, the stakes will be as high as they have ever been.