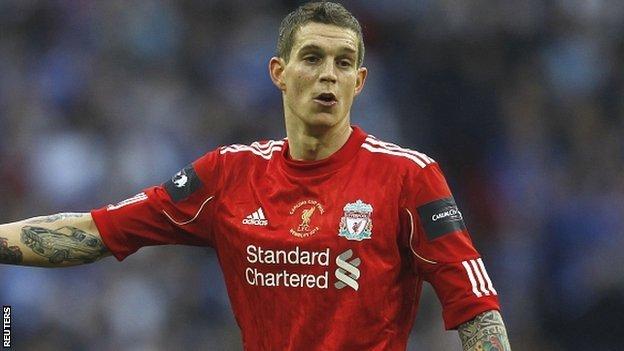 Liverpool defender Daniel Agger will be out for "a few weeks" after fracturing his rib during Sunday's Carling Cup final victory over Cardiff City.

Liverpool are also yet to discover if a tight hamstring will sideline captain Steven Gerrard for the game at Anfield.

Gerrard limped out of England's 3-2 loss to the Netherlands on Wednesday.

"If I don't know what it is, I can't tell you whether there is every chance or no chance [of Gerrard facing Arsenal]," Dalglish told Liverpool's official club website. "It's best for us to just wait and see what the medical people have to say once they've seen him."

Agger's latest problem adds to the long list of injuries the Denmark international has suffered since his move from Brondby in 2006.

Agger, 27, and centre-back partner Martin Skrtel have helped Liverpool to the second-best defensive record in the Premier League this season, with the club conceding just 23 goals in 25 matches.

"Anybody that is injured is a miss. Daniel has been playing fantastically well this year, but we'll miss anybody that is not fit and available," said Dalglish.

"The squad is there to cover eventualities, injuries and suspensions and we'll need to cover for Daniel if he's going to be out for a few weeks."