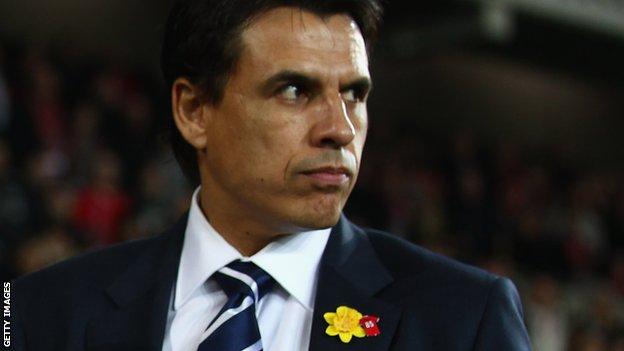 Wales manager Chris Coleman has said he was disappointed by the timing of Raymond Verheijen's departure.

Coleman's debut as Wales boss ended in a 1-0 defeat by Costa Rica in the Gary Speed memorial match.

Verheijen, Speed's assistant, stood down five days before the game accusing the FAW of "political and destructive games."

I don't want a number two that's standing beside me or inching in front of me. If they want that, go and become a number one somewhere

"I was disappointed in Raymond," Coleman told the BBC's Sport Wales programme.

The game against Costa Rica was Wales' first international match since the death of former captain Speed last November.

Verheijen had been due to lead preparations for the game along with fellow assistant Osian Roberts, with Coleman taking a background role.

But Verheijen, who has worked at World Cups with the Netherlands, Russia, South Korea and Australia, announced his resignation on Twitter.

Coleman had refused to discuss the Dutchman's resignation in the build up to the game, saying the focus was on remembering Speed.

But in the aftermath of Wales' defeat against Costa Rica at Cardiff City Stadium, the former Fulham and Coventry manager has broken his silence.

The two men had held talks in London in February with Coleman at the time describing the discussions as "positive."

"I spoke with Raymond three weeks ago. It wasn't a conversation that we agreed on everything, I didn't expect it would be," said the ex-Blackburn Rovers defender.

"When you're working you have to understand, as a manager or as a coach, it's not a popularity contest.

"I don't want a number two that's standing beside me or inching in front of me. If they want that, go and become a number one somewhere."

Verheijen had warned the Football Association of Wales against "turning their back on Gary Speed's legacy" when appointing the next Wales manager before Coleman was appointed in January.

With Verheijen stepping down, Coleman has added former Wales and Fulham team-mate Kit Symons into his management team, while Roberts remains in the set-up.

Wales face Mexico in a friendly in New York in May and host Bosnia in August before their World Cup qualifying campaign begins against Belgium in September.