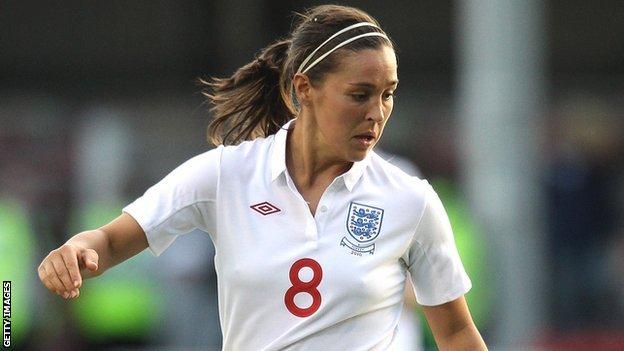 Everton midfielder Fara Williams celebrated her 100th cap with the goal that gave England a 1-0 victory over Switzerland at the Cyprus Cup.

"It's a very proud day for me," said the 28-year-old midfielder.

"It's a massive achievement to reach 100 caps and getting the goal made it extra special."

Powell paid tribute to a player that has been in the England set-up since the National Coach took charge of the national team in 1998.

"I've known Fara since she was 14," said Powell, "and you could always see the potential she had to come through the youth teams and make it at senior level.

We were a bit untidy and there were too many unforced errors, but we improved in the second half and in the end we deserved the win

"She's been a great servant and ambassador for the England team as well as a quality player, but I think there's still more to come from her.

"She's not been as consistent as she might have been over the years, but she had one of her better games today and I was delighted to see her get her 100th cap."

Williams' winner arrived 15 minutes from time after neither side had created any clear-cut chances in a tight contest played in Larnaca.

England were on the back foot for much of the first half, but they took control after the break and Williams headed the only goal from a Jess Clarke cross.

Powell said: "Switzerland came out of the blocks quicker than us and they were the better team in the first half.

"We were a bit untidy and there were too many unforced errors, but we improved in the second half and in the end we deserved the win."

If England now beat France in their last Group A game on Sunday they will be through to Tuesday evening's final.

Powell's team lost on penalties to the French in last year's World Cup quarter-final, but the National Coach insists that Sunday's clash will not be a revenge mission.

She said: "It will arguably be our toughest group game of this tournament and what I'll be looking for is a good performance that can hopefully bring us another win."

Scotland came from behind to beat Holland 2-1 in their Group B match, while Northern Ireland went down 1-0 to South Korea in Group C.