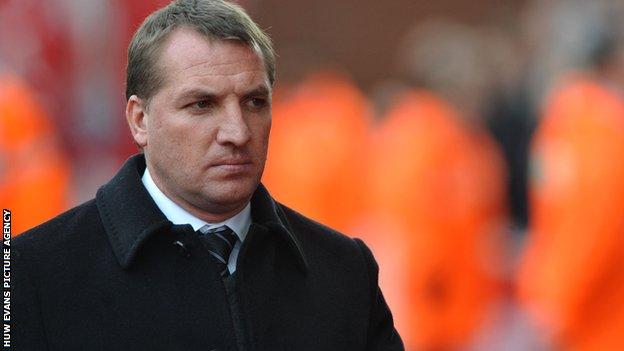 Swansea manager Brendan Rodgers insists his side have plenty of work to do in order to secure Premier League safety.

The Swans are currently 14th in the table, nine points clear of the relegation zone but have lost their last two games.

They travel to bottom side Wigan Athletic on Saturday and Rodgers says his side are not yet safe themselves.

"We are not jumping the gun," said Rodgers.

"People are saying we are safe with 12 games to go, but we have a lot of work to do and we need to make sure we keep collecting points."

Swansea will be aiming to take another major step towards Premier League survival when they face a Wigan side who have won just one home game this season.

Despite Wigan's poor home form, Rodgers expects a tough game against a side managed by former Swansea boss Roberto Martinez.

"Roberto has done a terrific job over the last few seasons," added Rodgers of the Spaniard, who left Swansea for Wigan in 2009.

"They have gone through a run where they couldn't win games, but he has remained positive and this will be one of the most difficult games we have had.

"Wigan will know if they are to have a chance, they have to win their home games and they will see every game as an opportunity to do that.

"But we go there with confidence and I believe we can go to any ground and win."

Goalkeeper Michel Vorm is set to return for the game at the DW Stadium having missed the 2-0 defeat at Stoke due to a virus.

Vorm was also forced to sit out the Netherlands' friendly win over England at Wembley, but Rodgers said he should be back to face the Latics.

"There has been a virus that has swept around a few of the players, but Michel has been back in training and it's great to see him back in again," said Rodgers.

"Michel has been brilliant this season, he is a great guy, a top performer at this level.

"I really enjoy working with him, he is in love with his football and you can see that in his performance level and focus in games.

"It was a difficult for Gerhard Tremmel to come in last week and most of what he had to deal with he dealt with well.

"But in Michel Vorm you have one of the best performers in the Premier League so it's good to have him back."

While Vorm is set to return to the Swansea line-up, compatriot Kemy Agustien is a doubt for the run-in.

The 25-year-old underwent ankle surgery earlier this week and had been set to be sidelined for three to five weeks, but Rodgers confirmed the Dutchman will be out for longer.

"He has had the operation and once the surgeon looked in there he had a few more issues than we first anticipated so it looks like he will be out longer than what we hoped," he said.

"He has been an important member of the squad.

"Kemy has been fantastic when he has been asked to play and had consistency in his training and he gives us that physical presence.