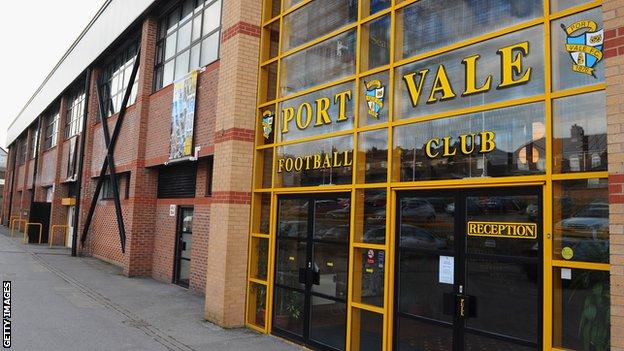 Administration was confirmed on Friday at a hearing in Birmingham, following an application at the High Court on Tuesday by Stoke-on-Trent City Council.

The action concerns outstanding loan payments, while Vale have been hit with a winding-up petition by HM Revenue & Customs over an unpaid tax bill.

Vale have dropped to 15th in League Two, 12 points from the play-offs.

The club are currently under a transfer embargo and staff and players have only been paid 25% of their wages.

At the hearing, Judge Barker QC said: "In some ways this is a very sad matter.

"The sale of a football club is never easy. Hopefully when it rises, it will flourish."

"As previously stated the administrators will be Begbies Traynor."

Speaking on Tuesday, Pervez said: "We have given a clear steer to officers to explore putting Port Vale into administration.

"This is as opposed to liquidation, which would see the end of the club."

The administrators will look to find a buyer to keep the club alive and they may turn to Mo Chaudry, who had an offer of £1.2m for 54% of shares turned down last summer and is watching developments at the club closely.

Vale do not have the number of directors needed, by law, to function properly after former chairman Peter Miller resigned last week.

Vale last went into administration in 2002 and were brought out of it the following year by a supporter-based group called Valiant.