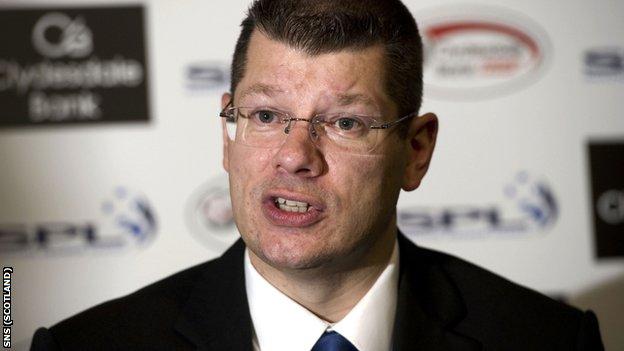 The clubs will discuss whether changes need to be made, which could mean "tougher" rules being rubber-stamped at a general meeting in April or July.

"It is vital that we do not shy away from these issues," said SPL chief executive Neil Doncaster.

"It is important that we keep the whole issue of financial fair play firmly in the spotlight."

Rangers are in the hands of administrators and the financial crisis at Ibrox has already had an impact on other top flight clubs.

Dunfermline are owed £85,000 in ticket revenue from their match with Rangers on 11 February and have not been able to pay full salaries to all staff, including management and players.

To turn a blind eye, to allow clubs to continually fail to make prompt payments as they fall due, would be to allow those clubs to gain an unfair sporting advantage

Hearts have also been guilty of making late payments to players this season.

"Improving our rule book and making it less likely that our member clubs end up in financial difficulty in the first place should continue to be a priority," added Doncaster.

"And with this in mind, all 12 SPL member clubs will meet this Monday.

"On the agenda will be our existing rules on financial fair play and whether our current rule book needs improvement in the face of the financial challenges being faced by several member clubs.

"If agreement in principle is reached, this could mean our clubs voting on new, tougher, rules on financial fair play at a general meeting, either in April or July this year.

"It will be a difficult debate. But it is vital that we do not shy away from these issues or bury our heads in the sand.

"It may be uncomfortable to address these thorny problems head-on. But the long-term health and prosperity of Scottish football demands that we do just that."

Uefa's financial fair play regulations require clubs to balance their books over the medium term, not spend more than they earn, and operate within their financial means.

"Whether the precise system of measurement used by Uefa is perfect is a moot point," Doncaster continued.

"But the logic behind the principle however is, I think, broadly sound. And it is this same principle that explains the position of the SPL.

"To turn a blind eye, to allow clubs to continually fail to make prompt payments as they fall due, would be to allow those clubs to gain an unfair sporting advantage over all those other clubs that pay their players, the taxman and other clubs on time.

"That is one of the reasons why, whenever the SPL receives a request from players to adjudicate on their contracts, it has a duty to do so.

"The fundamental basis of any football league is that all member clubs are treated equally."