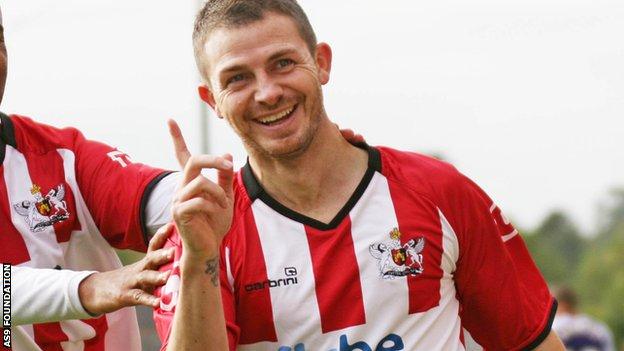 Jamie Cureton says he is hoping to help Exeter City avoid relegation after joining the club on loan until the end of the season.

The 36-year-old striker made the move from Leyton Orient on Thursday, eight months after leaving St James Park.

"I'd like to get as many goals as possible, I'd be hoping to get between five and seven goals but there's no major target," he told BBC Radio Devon.

"Hopefully I can help the team out of the situation they're in."

He added: "As long as I can contribute and help in wins then I'll be happy."

Cureton scored 20 goals last season at St James Park, but the veteran hit-man has found the net just once since moving to Orient in the summer.

"It was really good last year and I thoroughly enjoyed it," he said.

"Things happened and I moved on, it's not worked out and I've been given this opportunity to come back and it's great.

"I haven't played a lot to be honest, and I didn't really have a pre-season and when I have played I've not really had chances.

"You have to deal with these things and move on, I'm big enough to accept that and hopefully I'll move on, come down here and get goals."

And Cureton did not rule out the possibility of returning to St James Park permanently when his deal at Brisbane Road runs out in the summer.

"You never know. I'm out of contract in the summer and we'll see what happens," he added.

"I think I can go on late into my 30s and hopefully to my early 40s, I feel good so hopefully I can do that."