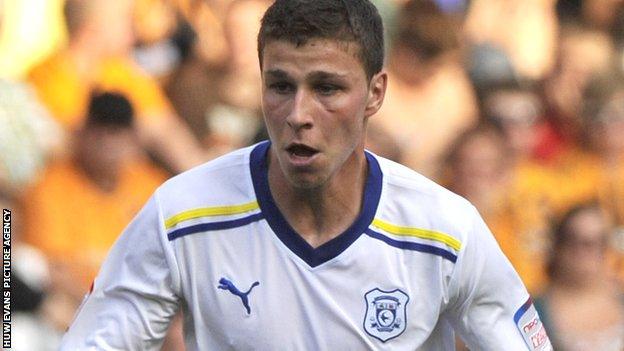 The Slovakia Under-21 captain is on a season-long loan at Cardiff from Slovan Bratislava.

"We've got an agreement in principle," said Mackay. "It's something we're on going with at the moment. It's something that's very close.

"He's someone I think that's got a really promising future if he keeps progressing the way he is."

Kiss has started 13 Championship games in Cardiff's competitive midfield as they push for promotion to the Premier League.

He has scored once in 28 appearances and Mackay says he has been impressed with how quickly the 21-year-old has adapted to life in south Wales.

"He's settled in very comfortably in life in Wales considering he comes from a different culture."

Mackay admits Cardiff's efforts in losing on penalties against Liverpool in the Carling Cup final has taken it's toll on the squad.

But after a week of recovery, the Scotsman says they must now forget their Wembley disappointment and kick-start their promotion campaign.

They welcome West Ham United to Cardiff City Stadium on Sunday, having lost three of their last four Championship games.

"The season doesn't stop," said Mackay, whose side beat West Ham 1-0 on the opening weekend of the season in August.

"It was a terrific achievement by the players to get to the Carling Cup final and to run Liverpool to the extent that they did.

"But it's back to 14 games to go and concentrate on doing as well as we can in every one of those games."