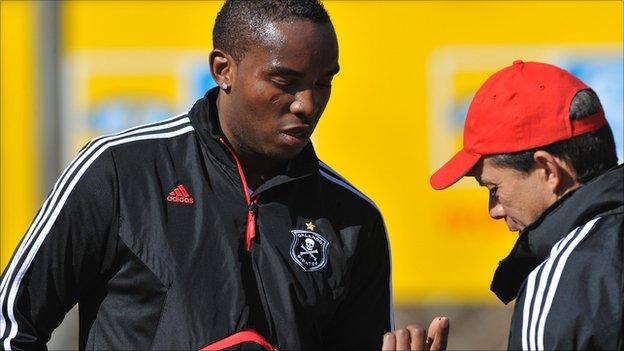 Former winners Orlando Pirates went out of the African Champions League on Saturday at the first round stage, humbled by Angolan side Recreativo de Libolo.

Tipped as potential champions before the first round kicked off two weeks ago, the Johannesburg club suffered a shock 3-1 defeat in the home leg.

They fared a little better in the return leg, drawing 1-1, but left themselves with too much to do and went out 4-2 on aggregate.

Striker Benni McCarthy, now 34, was seeking to add an African Champions League medal to the European one he gained with Portuguese side Porto in 2004.

Pirates were one of two former champions in action. The other was Cairo-based Zamalek, who squeezed through 2-1 on aggregate against Young Africans of Tanzania.

Ahmed 'Mido' Hossam, though, was available after a lengthy lay-off, and it was his goal just past the half hour mark which decided the tie.

The world's most capped international, Ahmed Hassan, had the chance to ease the nerves but missed a 79th minute penalty.

Young Africans played much of the second half with ten men after defender Abuu Ubwa was sent off.

Crowd trouble instigated by Zamalek fans during a Champions League qualifier in 2011, meant that the match was played behind closed doors.

Earlier on Saturday, Platinum of Zimbabwe proved too strong for Swaziland's Green Mambas. They triumphed 4-0 in the second leg, to go through 8-2 overall.

Platinum will next face Sudanese side Al Merreikh in the second round.

There were two ties settled on Friday, with aggregate wins for Algerian sides ASO Chlef and JSM Bejaia, over ASFA Yennenga of Burkina Faso and Chad's Foullah Edifice respectively.

Meanwhile, the opening leg of the clash between DR Congo's Vita Club and Atletico Olympic of Burundi has been delayed until 10 March.