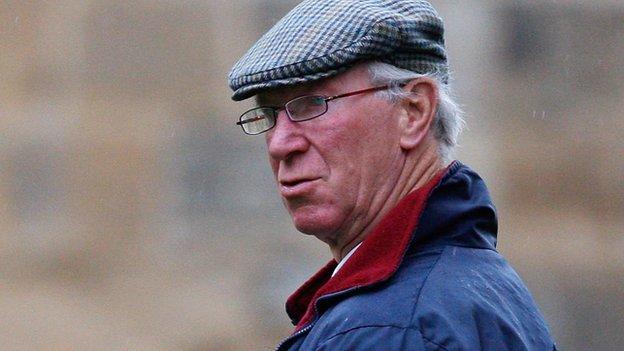 England 1966 World Cup winner Jack Charlton is recovering in hospital after hip replacement surgery following a fall at his home.

The 76-year-old fell down the stairs at his home in Northumberland on Thursday and had surgery on Friday morning.

His son Jon said: "He's fine. He had the operation this morning and it was fine. Everything went well.

"It's not a big operation and, as long as he came through it OK, he is expected to make a full recovery."

Ashington-born Charlton, along with younger brother Bobby, was part of the England side that beat West Germany 4-2 after extra time in the 1966 World Cup final at Wembley.

He also managed the Republic of Ireland to the World Cup finals in 1990 and 1994.

The former Leeds United defender and Middlesbrough, Sheffield Wednesday and Newcastle manager fell downstairs, while his wife was out of the house, but managed to get to a telephone to alert his son.

"It was surreal," added Charlton Jr. "When I got there, he was sitting in a chair watching the telly, although we then realised his hip was broken."

Charlton is expected to be released from hospital on Monday.