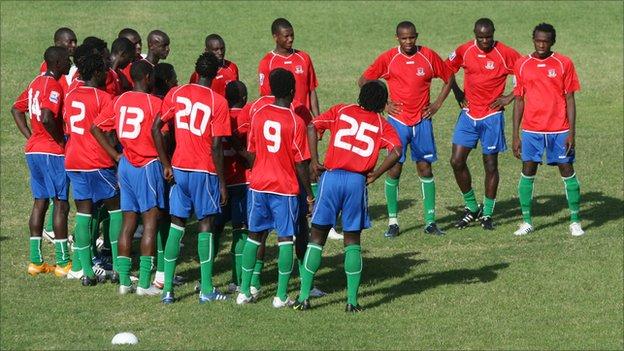 The Gambia's sports ministry has sacked the country's Football Association.

The move comes two days after the Scorpions lost the first leg of their first round 2013 Africa Cup of Nations qualifier 2-1 at home to Algeria.

"The FA's dissolution came at a time when The Gambia were making no headway in continental and global competition," said sports minister Alieu Jammeh.

The move will concern Fifa, which outlaws governmental intervention in the running of a national association.

Nonetheless, Jammeh plans to install a new interim committee to take charge in the near future.

"It is now time to excuse the executive and set a new interim committee that will take care of the country's football," added Jammeh, who only assumed his position last month.

Reports state that the entirety of the Gambian FA has been dismissed by the Ministry of Youth and Sports.

In their long history, The Gambia - a tiny country of just under two million - have never qualified for a Nations Cup nor World Cup tournament.

Nonetheless, the sports ministry took the action in an attempt to ensure that the West Africans do one day translate their relative success at junior level to the senior stage.

In 2007, their Under-20 team grabbed third place at the African Youth Championship in Congo.

Two years later, they won their first Caf continental title when their juniors became Under-17 champions in Algeria.

The return leg of their Nations Cup clash with Algeria will be played in June, sandwiched betwen the Scorpions' opening qualifiers for the 2014 World Cup in Brazil.