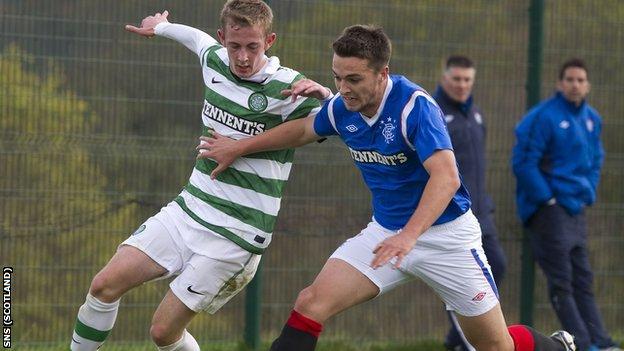 Carlos Bocanegra is hopeful that youngsters Andy Mitchell and Chris Hegarty will prove as able deputies as Salim Kerkar and Andy Little in a Rangers squad being further stretched.

Kerkar and Little both scored in last week's 4-1 win over Inverness after being given starting places.

Now midfielder Mitchell and defender Hegarty are in the squad to face Hearts as cover for injuries and suspension.

"When guys go out, others have to come in and perform," said Bocanegra.

"And Salim got to start and had a good game, while Andy played up front and played excellently.

"His work-rate is great and he chases everything down.

"He is a typical Rangers player the way he gives his all and it was great that he got a goal too."

Rangers failed to hold their usual pre-match media conference on Friday amid discussions between the players' union and the Scottish champions' administrators over possible job cuts at Ibrox.

And, speaking to Rangers' website, Bocanegra steered clear of discussing the prospect of redundancies.

However, with defender Kirk Broadfoot missing the visit by Hearts through injury and midfielder Maurice Edu and the versatile Sasa Papac both suspended, manager Ally McCoist has had to call in two young players who were on duty with Northern Ireland's Under-21s in midweek.

"Again, we are going to have to shuffle this weekend," added Bocanegra.

"We have had quite a few injuries and suspensions, but it means someone else gets a chance.

"Mo has been doing really well for us in the middle of the park winning tackles and breaking-up plays so he will be missed in there.

"But we will shift things around and we have guys who can come in and do well."