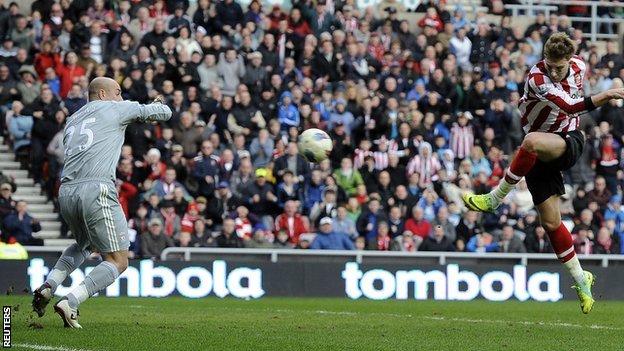 Liverpool's faltering league form continued as they were beaten by a determined and dogged Sunderland side.

After a forgettable first half, the Black Cats took the lead when a Fraizer Campbell shot rebounded off the post and keeper Pepe Reina's head, before Nicklas Bendtner side-footed in.

Liverpool brought on Steven Gerrard and Andy Carroll but to no avail.

Sunderland sat back and protected their lead against a Reds side which failed to come close to an equaliser.

Liverpool may have won the Carling Cup two weeks ago but a top-four place - and Champions League football - seems far from their grasp after just one league win from their last eight outings.

The gap between the Merseysiders in seventh position and fourth-placed Arsenal is now 10 points - while they are eight points closer to the bottom of the table than they are the top.

The victory moves Sunderland two points behind Liverpool - and ended a run of one point from nine going into the game.

Sunderland's pressure and positional discipline provided a tough challenge for a Reds side that rarely provided the guile and invention to show they were capable of breaking down their hosts.

Liverpool lost their third Premier League match in a row. They have not done this since October 2003 under Gerard Houllier

Instead, Liverpool were drawn into a fractious affair against a Black Cats team which refused to allow them to get into any type of stride.

Both goalkeepers were hardly in action before Sunderland stopper Simon Mignolet was eventually tested.

The Belgian spread himself to block an acute-angled shot from Liverpool forward Luis Suarez, before palming over an inswinging Charlie Adam free-kick.

The defining moment of the match was then provided by Sunderland when Bendtner scored a winner typical of the bizarre nature of goals that seems to mark fixtures between the two sides.

Sunderland won at the Stadium of Light two seasons ago courtesy of a goal from Darren Bent that bounced off a beach ball, while Liverpool defeated Sunderland when they pounced on a free-kick by Michael Turner, which the defender said he had not taken in September 2010.

"It was a scrappy affair in which both teams cancelled each other out for the most part. But Nicklas Bendtner's goal was enough for Sunderland to register a big home win against a Liverpool side who have now lost three league games in a row."

This time around Bendtner seized his chance after Campbell's shot had hit the post, rebounded on to Reina's head and then back on to the post before falling for the Sunderland striker to score.

The goal gave the home side something to protect and, despite missing key players Lee Cattermole, Stephane Sessegnon and Kieran Richardson, they managed to hold out.

The closest Liverpool came to an unlikely equaliser was when Gerrard hooked a cross back into the Sunderland box and Dirk Kuyt missed his header.

Sunderland manager Martin O'Neill: "In a game of very few chances, it was great to get the goal and it eventually proved the winning goal in the match.

"With the changes that we had to make with influential players out of the team, I couldn't really have asked for much more. It was a great effort by the team."

Liverpool manager Kenny Dalglish: "We will say what we said at the very first game of the season - we will play all the matches, count the points up and see where we finish then.

"If we could maybe get fourth spot, it would be fantastic for the football club, but winning the Carling Cup was fantastic, getting into the sixth round of the FA Cup is more than where we have been for a little while.

"I don't think the performances that we have had, especially at home, have merited the number of points we have got.

"But we just need to keep going and do what we do well, keep our mouths shut, not feel sorry for ourselves and try to get as many points on the board as we can."