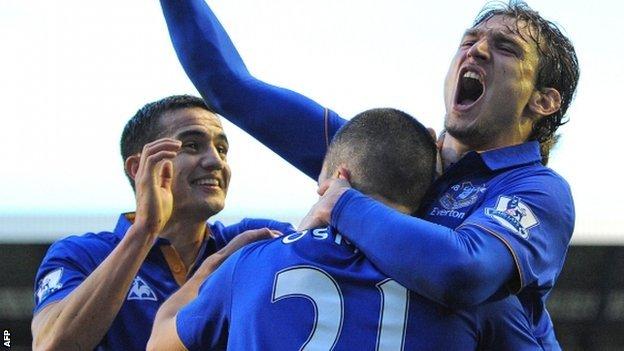 The Londoners improved after the break but have now lost three league games in a row.

And after an encouraging season so far, during which Tottenham have been considered Premier League title contenders, this performance was evidence that they have a job on their hands to stay in the top four.

When these two sides met previously on 11 January a Spurs win elevated them to within three points of the summit but since then they have only registered two wins from eight league games.

For Everton, though, this extended their unbeaten run to nine matches following that defeat at White Hart Lane and with Liverpool losing at Sunderland, the blue half of the city will be relishing Tuesday's Merseyside derby.

Moyes will have been in his post as Everton manager for 10 years the day after that game and, with speculation that he might take over from Redknapp should the 64-year-old be offered the England job, it was a timely reminder of the Scot's ability to engineer a hard-working, effective team on limited resources.

Spurs, who have spent heavily in recent seasons, have suffered a dip in form which has coincided with Redknapp being tipped to replace Fabio Capello.

His team of star names, with former Everton striker Saha on the bench, failed to create much before the break as the hosts took advantage of the visitors' deep midfield, which had Sandro sitting alongside Scott Parker.

In fact, it took 20 minutes before there was a meaningful chance, Friedel saving Marouane Fellaini's angled shot. But not long after the American keeper had warmed his hands, he was picking the ball out of the net.

Leighton Baines found Osman in the inside left channel and the midfielder's first touch took it past Younes Kaboul before he cleverly cut the ball back for Jelavic to side-foot in from 10 yards.

The former Rangers players also tested Friedel with a free-kick, but it was only after the goal that Redknapp's side came to life and it took until the second half before Tim Howard had anything to concern him, with Jermain Defoe twice firing in low shots.

Saha came on to replace Emmanuel Adebayor early in the second period, with Redknapp having already dismissed talk of a gentleman's agreement between the two managers that he would not play.

And the change came during an upsurge for Tottenham, as Luka Modric fired over and soon after Saha's effort was blocked by Sylvain Distin's face.

Outside of Osman's breakaway Everton rarely threatened and once Van der Vaart replaced Sandro, Redknapp had his full range of resources on the pitch.

Defoe had the ball in the net but it was rightly ruled out for offside, and Van der Vaart hit the bar late on.

Saha then almost earned a point in the dying stages when he hit the post from close range but Everton hung on, allowing Moyes to reflect that Jelavic is already proving an able replacement.