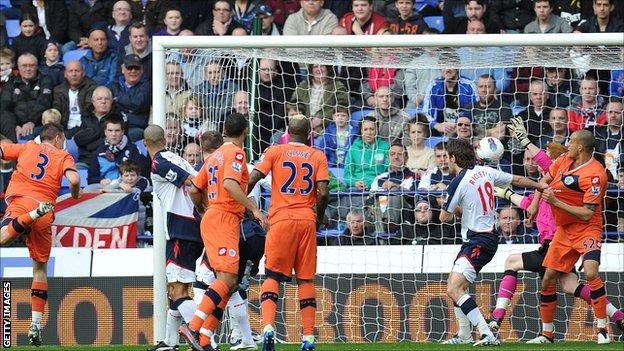 QPR should have had a first-half lead but Clint Hill's header was not awarded despite clearly crossing the line.

Bolton took the lead through Darren Pratley's header before Djibril Cisse equalised from close range, although replays showed he was offside.

But late on Klasnic latched on to Ryo Miyaichi's pass to beat Paddy Kenny.

The result means QPR are now in the drop zone following Blackburn's 2-0 victory, with Hughes' side level on points with Wolves below them.

And with games against Liverpool, Arsenal, Manchester United, Tottenham, Chelsea and Manchester City to come, Hughes will fear for his side's chances of survival.

They did enough to win this game and were the better of the two sides but, if they are relegated, may see Hill's disallowed header as a pivotal moment.

With the scores level at 0-0, Hill's header would have shifted the momentum QPR's way but instead it gave Bolton a lifeline.

A huge victory for Bolton and a really damaging defeat for QPR. What a lucky result this was for Bolton because Clint Hill's header crossed the line by about two feet before Adam Bogdan pushed it on to the underside the of bar. Rangers and manager Mark Hughes will be incensed.

For Bolton, this result was their first win in five, and could also prove crucial in their attempts to beat the drop with Owen Coyle's side now a point above the bottom three.

Just two points separated these two teams at the start of play and the first half was evenly balanced.

Bolton had the first real chance of the game with David Wheater's header from Miyaichi's corner headed off the line by Bobby Zamora.

Soon after, Zamora was in action at the other end crashing a half-volley from a tight angle against the crossbar following a floated pass from fellow striker Cisse.

The controversial incident arrived 20 minutes into the game with Hill denied a goal when his header from Joey Barton's corner clearly crossed the line, before goalkeeper Adam Bogdan palmed it on to the underside of the crossbar.

However, with the assistant referee unsighted and referee Martin Atkinson unsure, Hill was denied his first Premier League goal, on his 400th career start.

The incident reopened the debate on the use of video at football matches and prompted a statement from the Football Association reiterating their desire for the introduction of goal-line technology.

It was a huge blow for QPR and proved a pivotal moment in the half, with Pratley putting Bolton ahead shortly after.

He headed past Kenny from six yards out following an accurate cross by Tim Ream on the left, although Hughes would have been far from impressed with the non-existent marking.

Rangers had a chance to level just before the break but, after being played in by Cisse, Nedum Onuoha fired against the legs of keeper Bogdan.

It did not take long for Hughes' side to equalise after half-time, as Shaun Wright-Phillips's deflected pass found Cisse's run, with the striker keeping his cool to fire low past Bogdan.

However, replays showed the French international was offside.

Of the two sides, QPR looked the more likely to win it - with late pressure seeing substitute Jamie Mackie's shot hit the side of Wheater's head and go out for a corner.

As the game looked to be heading for a draw, Klasnic found space in the box and was played in by Miyaichi before firing a low shot across Kenny into the net.

It prompted huge celebrations on the final whistle at the Reebok Stadium, while Hughes made his feelings known to the officials.