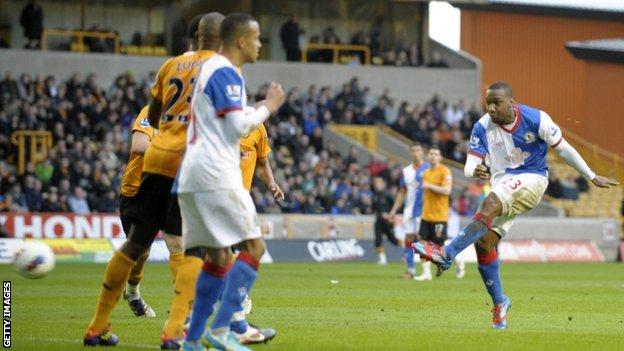 Junior Hoilett scored a fine brace as Blackburn climbed out of the relegation zone to leave Wolves languishing one place off the bottom.

Home fans staged a protest against chief executive Jez Moxey's before kick-off and then saw a poor showing.

Hoilett opened the scoring when he controlled a half-volley superbly to fire into the far corner.

And the Canadian wrapped up victory with a 25-yard drive after the break.

The defeat leaves Wolves in 19th place, with one win in their last 14 league games, after a tense display typical of a side short of confidence.

Banners were unfurled outside the main entrance at Molineux before the game as fans made their anger clear over the decision to appoint Connor as the man to last month.

and were all interviewed for the post before former assistant Connor was handed the job until the end of the season.

"The Wolves fans didn't give their side too much grief. There is a lot of football still to be played at the bottom but it's been a very good day for Blackburn and Bolton. This is the best I've seen from Blackburn in a very long time."

To their credit, the home fans remained largely supportive during the match, despite Connor's side's fragmented display - in which they barely threatened a fragile Blackburn defence.

Rovers had not kept a clean sheet in the Premier League for 30 games - a run stretching back to April 2011 - but Paul Robinson only had to make one real save in the 90 minutes, where he easily denied Steven Fletcher.

Wolves defended abysmally last weekend and, while the return of on-loan Tottenham man Sebastien Bassong to the back four saw a slight improvement, they were again at fault as the dangerous Hoilett opened the scoring just before the break.

Morten Gamst Pedersen hurled a long throw into the area, Wolves' Premier League debutant David Davis could only flick on towards his own goal, and Hoilett was afforded far too much space to acrobatically drive a half-volley into the far corner.

Connor's side made a brighter start to the second period, as Matt Jarvis crossed for Fletcher to fire at Robinson, but they continued their habit of conceding possession cheaply and were punished when Hoilett drove in the second from Yakubu's break down the left.

Hoilett - - collected the striker's pass, skipped past Jamie O'Hara and drilled a left-footed shot beyond the reach of Wayne Hennessey into the net.

Wolves substitute Nenad Milijas should have hit the target from another decent Jarvis cross in the final few minutes, but Rovers boss Steve Kean was able to savour a first away win since beating on New Year's Eve.