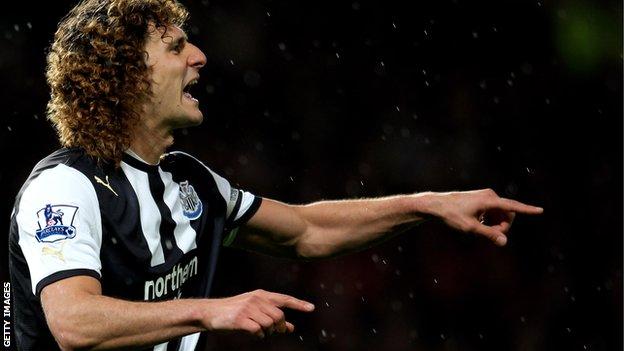 Captain Fabricio Coloccini and goalkeeper Tim Krul have signed new deals to give Newcastle a boost ahead of Sunday's derby game with Sunderland.

"It's a huge boost before the game," said manager Alan Pardew.

"Sometimes the most important players are the players you have already, and these guys have both got the chance of player of the year at this club."

Coloccini, 30, who joined Newcastle in 2008 after four years with Deportivo La Coruna, said he hopes to lift a trophy before his new deal finishes.

"I hope in these four years, we can win something for them [the supporters] and for the club," he said.

"All the players want to do better for the club. We are doing really well and we have to keep going like this.

"We have to keep going, working harder and hopefully at the end of the season speak about Europe."

Since joining the club from home-town club Den Haag in the summer of 2006, Krul has emerged through the ranks to become a key player in the Newcastle first team.

Following injury in 2006 to Newcastle's first-choice goalkeeper, Shay Given, now of Aston Villa, Krul was promoted to the bench as back-up to second-choice Steve Harper.

But after returning from loan spells at Falkirk and Carlise, Krul continued to impress and in the last two years has made the number one jersey his own.

He said: "We are definitely heading the right way and I am really happy to commit my future for five years.

"Of course committing Colo, our captain, is very important for me also because that just shows the way the club is heading at this stage.

"Times are great at the moment. I owe the club and I owe the manager a lot because he gave me the chance to play in the Premier League.

"The spirit is high in the group and everyone is looking forward to tomorrow because it's a huge, huge game to be involved in.

"To play for this club has always been my dream and I am going to do this for the next years to come. It's onwards and upwards, really."