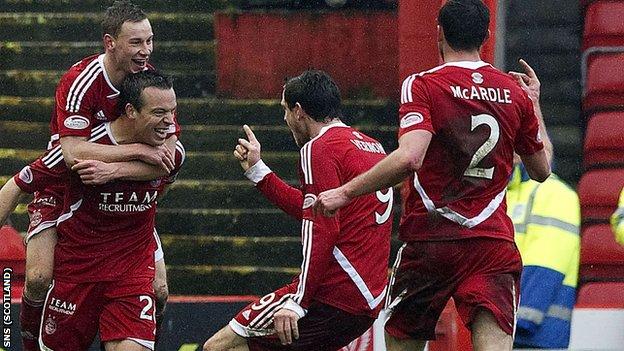 Aberdeen manager Craig Brown was pleased with his side's 1-1 draw against Celtic at Pittodrie but wants more wins from his men.

Andre Blackman's own-goal for Celtic cancelled out an Anthony Stokes opener on the stroke of half-time and the Dons held firm for a deserved point.

"In view of the run Celtic are on and the victories they've had, I think a draw is acceptable," said Brown.

"We need to get three points if we have aspirations to get into the top six."

Celtic took the lead on 28 minutes when Stokes rounded keeper Jason Brown to slot home, but the Dons were level before the interval as visiting defender Blackman diverted a shot from Gavin Rae into his own net.

I'm moderately pleased, because I thought in the second half we did enough to show that we're on the mend in terms of getting points

Aberdeen are now unbeaten in 12 games and while Brown was content with a point against the league leaders, he felt his players deserved a little more from the match.

"We had one or two good chances in the second half, and it's a compliment to our defence that Jason Brown in goal had one save to make in the first half," said Brown.

"So, that apart, Celtic didn't really threaten us too much and I was delighted with the second half defensive performance.

"When you get a home game and you draw, you're usually disappointed.

"I'm moderately pleased, because I thought in the second half we did enough to show that we're on the mend in terms of getting points.

"We've drawn our last five SPL matches, and I suppose a draw at Ibrox before Rangers' trouble when they had Jelavic was a god game to start a sequence of draws.

"This one, I suppose, is good, but in-between we've had draws at easter Road and Paisley and at home.

"So, these results are acceptable - but there's a huge difference between one point and three."