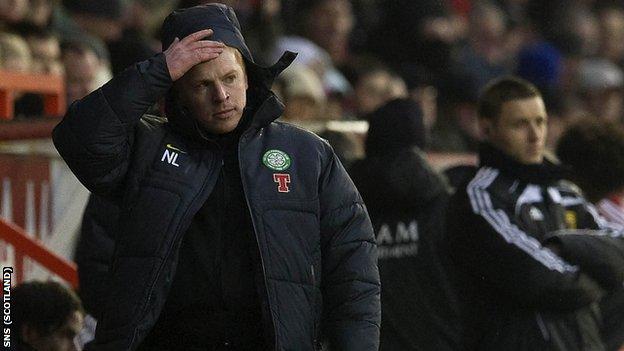 Celtic had 15 players out on international duty and Lennon watched the club's win streak of 17 league matches end at Pittodrie.

"These players had one day recovery from Wednesday night and travelling," Lennon told BBC Radio Scotland.

"For the game to be scheduled with 15 players away, it was always going to be a big ask."

Anthony Stokes' cool finish in the 28th minute was cancelled out on the stroke of half-time by debutant Andre Blackman, who put the ball into the back of his own net after attempting to clear a Gavin Rae shot.

I felt if the game had been a day later, we would have been much more at ourselves

Despite the loss of two points, Lennon's side are still 21 clear of rivals Rangers at the top of the Scottish Premier League.

"Aberdeen were fine, but I felt if the game had been a day later, we would have been much more at ourselves," added Lennon.

"We scored a great goal and lost an own-goal to a deflection.

"But I'm immensely proud of the way the players have handled things over the last few months.

"We've got a big month coming up and we should be a lot stronger for next week."

Celtic remain in contention for a domestic treble, but Lennon insisted he would continue to take one game at a time and concentrate on the forthcoming match against Dundee United at Tannadice in the Scottish Cup.

"We've been on a fantastic run, and the players and supporters should be immensely proud of it," said Lennon.

"We have a month of good games to look forward to, and I'm sure you'll see us at our best.

"We'll get on with what we're doing and I've enjoyed watching them play. Today wasn't one of our better days, but we've come away with a decent point.

"We don't play again until Sunday, so that'll give the players a chance to recover."