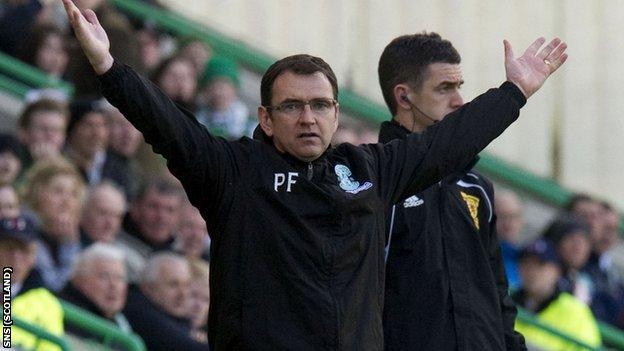 However, the draw earned the Edinburgh side a four-point advantage over basement club Dunfermline in their bid to remain in the top-flight.

"A week ago we were level on points, and now we're a little bit ahead," said Fenlon. "But that can change over a period of time fairly quickly."

"We're not going to get carried away. We have to take games as they come."

In a game of few chances Saints keeper Craig Samson was in fine form, thwarting early efforts from Leigh Griffiths and James McPake as the Easter Road club continued their poor run of home form which has failed to produce a win since September.

Fenlon felt his players should have taken all three points, but insists work is being done to improve home performances.

"We're a little bit disappointed that we didn't win the game, because we played quite well and created three or four decent chances," he told BBC Radio Scotland.

"Their goalkeeper was excellent and made some fantastic saves, so we're happy enuogh because we've opened up a little bit of a gap, but we're disappointed that we didn't take three points.

"They've had a fair few nil-nil games and defensively they're solid, so presume they think it's a good point for them coming here, but I can't fault the performance.

"The supporters want to see us win and we want to win games - we're trying to get away from that, and when we play at home we try to give the club something to get behind us.

I don't know if it's just down to nerves.

"Our record over a few seasons at home isn't particularly good - and that's got to change.

"Short-term, it's about making sure we get results, whether we're playing at home or away."