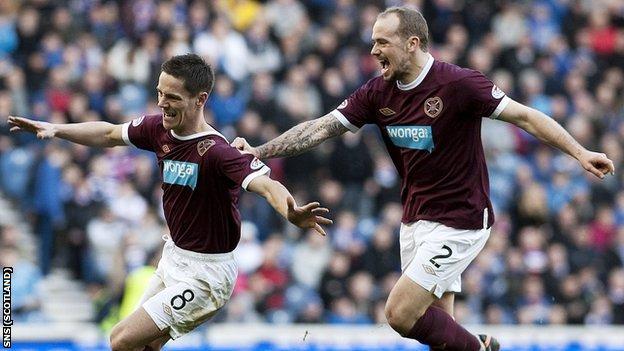 Hearts manager Paulo Sergio was reserved in his assessment of the Tynecastle side's victory at Ibrox.

Rangers, who are in administration, are expected to announce cuts to their playing squad on Monday and led before Hearts hit back to win.

"I'm very happy but I'm going to be very short in my declarations too," Sergio told BBC Scotland.

"I don't want to speak too much about the game as a sign of respect for all the professionals of Rangers."

Steven Davis' opener for Rangers was cancelled out by Ian Black's strike and Jamie Hamill scored a rebound after his penalty had been initially saved by Allan McGregor.

"Of course, I have to be happy with my players," added Sergio.

"I don't want to speak about the game because in this moment all the troubles that they [Rangers] are leaving, I believe that they can't be criticised by anybody.

"So, a sign of respect for all them, I just say one more time I hope they can solve their problems.

"For us, it was an important game. We didn't win the last six games. Because of that, this victory is very important."