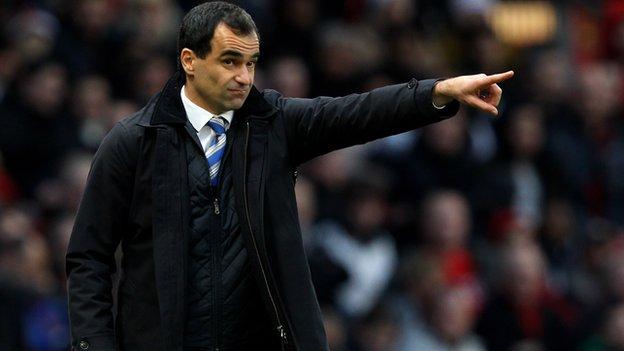 Wigan chairman Dave Whelan says manager Roberto Martinez's job is safe despite the Latics' position at the bottom of the Premier League.

Saturday's 2-0 home defeat by Swansea extended Athletic's poor run to only one win in 12 games.

"Roberto Martinez's future is secure. He has done a great job for the club," Whelan told BBC Radio 5 live.

"But we will have a meeting on Monday when he will put his cards on the table and I will do the same."

Martinez took charge of the Latics in the summer of 2009, with Wigan finishing 16th the following season.

Last term, they needed a final-day victory at Stoke to preserve their top-flight status.

NOT A HAPPY HOME LIFE

Their Premier League survival is again under threat this season, and two goals from Swansea's Gylfi Sigurdsson ensured they remain at the foot of the table, two points from safety.

But despite backing his manager, Whelan admitted he had serious concerns over the loss to the Swans.

"That was our worst performance in four or five years," said Whelan.

"I will have a meeting with him on Monday morning and ask him some questions about the performance and his selection.

"We had three quality [Victor Moses, Hugo Rodallega and Mohamed Diame] players on the bench and I want to know why."

Martinez accepted responsibility for the defeat, but explained that his player's midweek international commitments affected his selection.

"This was the impossible week for us with players arriving as late as last night after a nine-hour flight," said the Spaniard.

"Against Swansea you need to be very fit and we weren't at that level.

"But it is a reality check for us because we were nowhere near the levels we have been.

"I take responsibility for the result. I am disappointed with the result and the performance."