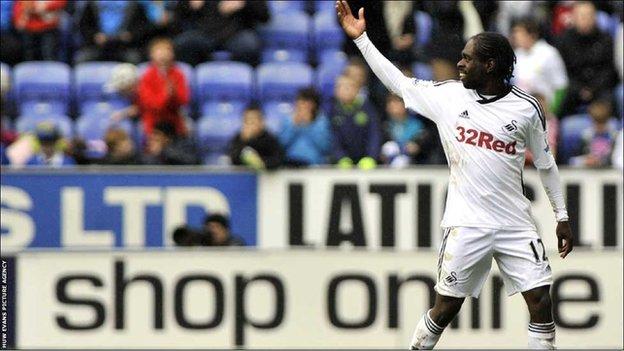 Swansea City have decided not to appeal against Nathan Dyer's sending off in the 2-0 victory at Wigan Athletic.

Manager Brendan Rodgers felt the decision was "harsh" but the club have decided not to appeal in case the three-match ban is increased to four.

"It was a harsh sending off," said Swansea manager Rodgers.

"He was in a good position and won the ball initially but the ball gets away from him.

"Football people will tell you he tries to get the ball.

"Nathan is not a malicious player. His foot is up and he tried to connect with the ball. But there was no malicious intent and no real force either.

"The player goes up and makes it look a lot worse than it was.

"But the laws of the game and the rules will tell you his foot is up and he has had a slight contact.

"In the modern game, when your foot is up and the studs are showing, you can get sent off."

A statement on the club's website said: "While the club feels the red card was extremely harsh, under the current guidlines issued to referees, it was felt that the risk of Dyer's suspension being increased... was too great."

Dyer was dismissed for serious foul play and a subsequent three-match ban will mean the 24-year-old, sent off for just the second time in his career, will miss Swansea's home games with leaders Manchester City and Everton as well as their trip to Fulham.

If the Swans were going to appeal Dyer's dismissal, the Welsh club's second red card of the season, they had to contact the FA verbally on Monday and submit their evidence for Dyer's defence on Tuesday.

"I feel sorry for Nathan as he gets kicked left, right and centre every game," added Rodgers

"The referee was excellent and was in a good position but... I didn't think it was a sending off."