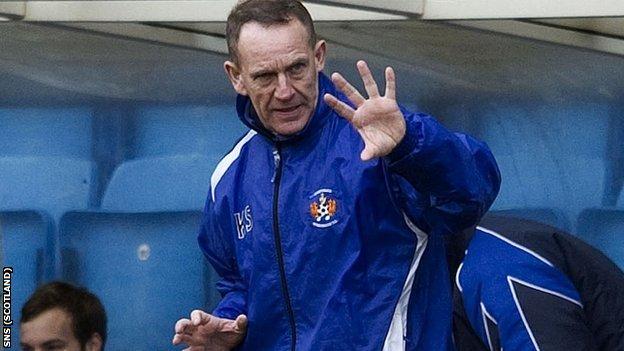 Shiels' son Dean and Saints' Cillian Sheridan each received a second yellow card for simulation, having both been cautioned earlier in the match.

"We have seen footage and it was a penalty, it wasn't a dive," said Shiels of his side's red card.

"The St Johnstone player was hard done by. They were two wrong decisions."

Killie were the first team to be reduced to 10 men in the 76th minute, Sheridan following two minutes from time.

"Dean was adamant that he had been fouled, which is why I wanted to have a look at it," Shiels said.

"He shimmied him [St Johnstone's Dave MacKay] at full flight and the guy stuck his foot out and caught him just inside the box.

"There was a very minimal touch but he caught him and it was certainly a penalty.

"Unfortunately we don't have the power to appeal.

"So even though someone has wronged you, you can't say anything and you can't appeal.

St Johnstone boss Steve Lomas said of Sheridan's dismissal: "There's always a chance that it gets levelled up, you've seen it before.

"But I am not going to sit here and criticise him [Charleston].

"It's a hard job and let's have it right, we don't have an abundance of referees coming through so I am not going to sit here and give him a hard time."