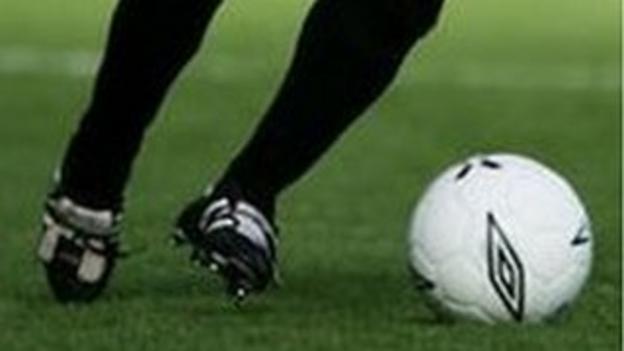 Kent league Herne Bay are just one step from the Wembley final of the FA Vase.

They beat Gloucestershire side Shortwood United 2-1 to move into the two-legged semi-final despite being reduced to 10 men in the first minute.

Midfielder Dave Soutan was sent off after just 43 seconds but that did not spoil manager Simon Halsey's mood.

He told BBC Radio Kent: "It's a magnificent achievement, I can't praise them enough but they've got this mental belief of not losing."

Herne Bay, who are just the second Kent league team to reach the last four in the competition's history, will now go into Monday's semi-final draw.

They could play Tyne and Wear side Dunston, West Auckland from County Durham or Staveley Miners Welfare who are based in Derbyshire for the right to play at Wembley.

Halsey said the fans played their part in the victory. He said: "The ground was blue and white, it was magnificent. Our fans are singing songs, it's great for the club, we've waited 125 years for a day like this."

Halsey also refused to criticise Soutan for his early dismissal which meant they had to play with 10 men for more than 89 minutes.

"There are no questions to be asked. The referee's made a great mistake, it was a yellow card, he didn't book anyone after that because he knew he made a howler, we just had to get on with it. He wouldn't talk to me at half time," he added.

Elsewhere Dartford closed the gap on Blue Square Bet South leaders Woking to six points with a game in hand after a 1-0 win over Tonbridge Angels, Welling remain third after beating neighbours Bromley 2-1 and Dover Athletic moved up to sixth after Billy Bricknell's late goal gave them a 1-0 victory at Salisbury.