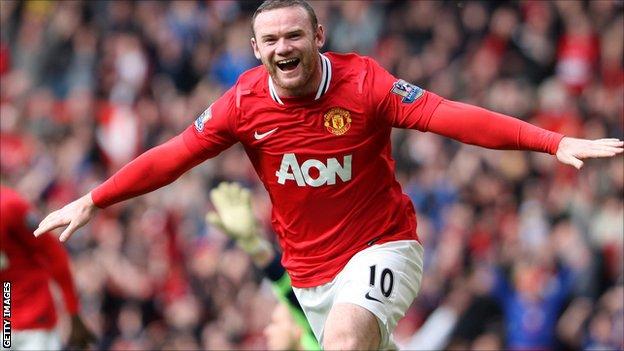 United took advantage of as they went a point clear of their neighbours.

Rooney gave United a 1-0 lead at the break, diverting Javier Hernandez's shot past Ben Foster on the volley.

The United striker then made it 2-0 from the penalty spot, while West Brom's Jonas Olsson was earlier sent off for a second bookable offence.

It was a deserved win for United who should have added to their tally in the second half.

Victory took United top of the Premier League for the first time since early October and with 10 games remaining they will be favourites to claim their 20th league title following City's unexpected slip.

They head to Wolves next Sunday knowing a win would take them four points clear of City who do not play again in the Premier League until Wednesday week against Chelsea.

Manager Sir Alex Ferguson used his programme notes to rally both United players and supporters as his side entered the "business end" of the campaign.

And Ferguson picked a side full of attacking intent with Rooney, Danny Welbeck and Hernandez all named in the starting line-up.

It took United a while to get going in this game, but this was a victory that was thoroughly deserved. Wayne Rooney gambled and got his reward, it was a fine finish.

But their start to the game was turgid and lacklustre, with West Brom the better of the two sides early on.

But the champions soon got going, with Paul Scholes finding space to orchestrate things from midfield, and in Ashley Young, United had the game's outstanding player.

The pressure eventually told, with Rooney breaking the deadlock. United's in-form striker gambled at the near post and expertly diverted Hernandez's shot past Foster on the volley from six yards out.

It was Rooney's 25th goal of the season - and his 14th in as many games - and gave them a deserved lead at the break.

West Brom began the second half like the first - full of intent - and were unlucky not to have been awarded a penalty after Patrice Evra tripped Peter Odemwingie in the box.

Referee Lee Probert waved away their appeals and replays suggested the Baggies man may have gone to ground too easily.

Straight after, United nearly doubled their advantage with Hernandez crashing a fierce shot from the edge of the box against the post before West Brom cleared for a corner.

From the resulting corner Rooney went close with his adventurous overhead kick straight at Foster.

United's pressure continued and Welbeck should have put them 2-0 up but, after rounding Foster, he inexplicably fired wide of an empty goal from a tight angle.

West Brom's task became that much harder with Olsson shown a second yellow for a lunge on Hernandez, meaning the Baggies had to play with 10 men for the remaining 25 minutes.

Young continued to terrorise the Baggies defence and he was bundled over by Andrews for a United penalty, which Rooney converted for 2-0.

With the game won, United introduced highly rated youngster Paul Pogba, 18, for Scholes and it provided an interesting sideshow for the remaining 20 minutes, as Pogba has been linked with a summer move to Juventus.

The Baggies brought on Shane Long and he forced an excellent save from De Gea while, at the other end, Young headed wide from 12 yards.

But it stayed at 2-0 with the biggest cheer of the day reserved for the announcement of Swansea's shock victory over Manchester City.

"We made a good fist of the first half until Rooney's goal.

"I didn't think we were attacking as well as we could do in that period. When we won the ball back we lost it too quickly and easily.''