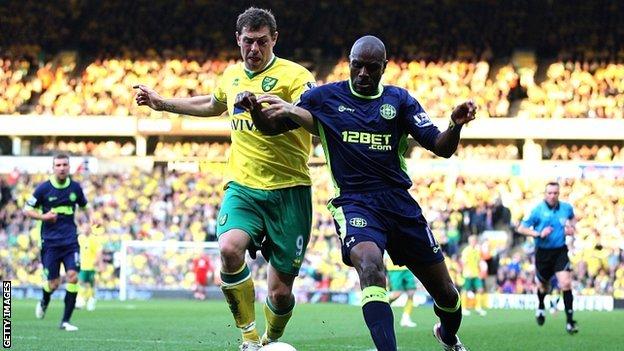 Victor Moses salvaged a point for Wigan at Norwich - but the Latics' poor finishing leaves them rooted to the foot of the Premier League.

Norwich took an early lead through Wes Hoolahan, who volleyed in.

But the Canaries were forced to retreat for much of the game - and the Latics eventually grabbed an equaliser when Victor Moses rounded John Ruddy.

Wigan boss Roberto Martinez has been bullish about his side's hopes of pulling off a second successive escape, despite still having to travel to Liverpool, Arsenal and Chelsea.

Compounding the tough calendar is a run of form that has now seen them win just one of their last 13 games. And, after Blackburn and Bolton boosted their survival hopes with victories over their relegation rivals on Saturday, Martinez urged his players to "keep the faith".

But the Latics started tentatively and Norwich, now without a win in four - their longest winless streak of the season, pounced on the visitors' insecurity just 10 minutes in.

Jackson squeezed in a cross from the left and Hoolahan sneaked ahead of Latics captain Gary Caldwell to hook in a volley with a well-improvised effort.

Wigan were guilty of being too intricate in attack, but their most fluid first-half moment came when Moses tore down the right wing and cut back to Hugo Rodallega, but the Colombian's shot was clutched by Ruddy.

Before today's game, Victor Moses had attempted 72 shots in the Premier League this season but scored only two goals.

The Latics were the better side for long periods but could not convert their pressure into goals, as Rodallega spurned another chance before the break - firing over the bar after Ruddy had spilled Jordi Gomez's stinging effort.

The two sides traded blows early in the second half as Grant Holt's header flashed just wide, moments before James McCarthy waltzed into the box but could only shoot straight at Ruddy.

Substitute Steve Morison almost conjured a second for Norwich moments after coming on, crossing from the right for Jackson, but the Canadian was foiled by a despairing challenge from Antolin Alcarez.

The Latics continued to push forward and, while it remained 1-0, Wigan always looked capable of scoring.

The equaliser came courtesy of Victor Moses. Seizing on a poor goal kick by Ruddy, Wigan worked the ball up to Shaun Maloney, whose perfectly weighted ball put Moses clean through, the forward calmly rounding Ruddy to tap into the empty net.

It was no less than the Latics deserved for a brave and committed display but, in a relegation scrap, it takes victories to pull teams clear of danger - and Wigan should have won it late on.

The former Celtic and Aston Villa playmaker pulled a cross back to the onrushing Diame, but the Senegalese stabbed his effort into the ground and over the bar.

It was a great chance but Diame had time for another glaring miss, dragging a shot wide after his trickery had put him in a great position.

The performance was one of Wigan's strongest in recent weeks but, still two points from safety, Martinez's side need to be more ruthless to pull off another great escape.